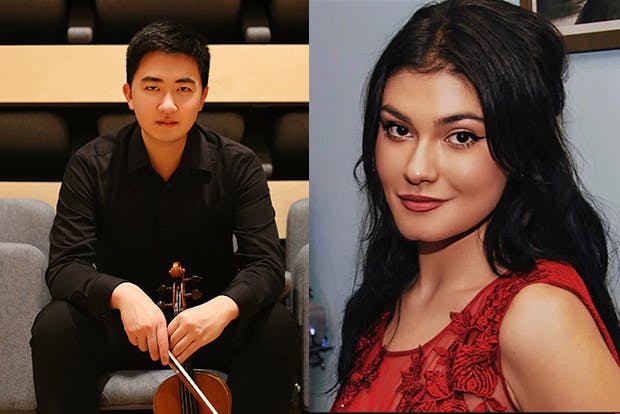 In 2014, Yuzhe established The Lohas Trio – comprising violin, viola and piano, a rarely-seen combination. The trio held a special concert at Shanghai Poly Grand Theater in 2017.

In 2018, under the guidance of young composer Gao Hong, he composed the Phoenix Nirvana Violin and Piano Sonata, which premiered at the Shanghai Conservatory of Music in June of the same year, receiving wide praise from audience. He subsequently held four violin solo concerts in Shanghai, Jiangsu province and elsewhere. In the same year, he co-operated with Professor Zhanhao He, composer of the famous Chinese violin concerto Butterfly Lovers, to perform around China with orchestra.

In 2019, he toured the world with the National Youth Orchestra of China. In same year, he entered Royal Birmingham Conservatoire, where he has studied with Jiafeng Chen and Susanne Stanzeleit.

This year, he was awarded the Harrison Frank Family Foundation Awards for Violinists Special Scholarship in the UK. Yuzhe has been awarded first prize in various international competitions.

Gabriela Talvan is a Romanian soprano currently in her fourth year of study at Royal Birmingham Conservatoire under Catherine Benson.

In July 2018 she took part in a musical tour in France called Entre Deux Airs where she debuted as a soloist with an orchestra in Paris at the L’Eglise Sainte Marie-Madeleine, conducted by Bogdan Voda.

During her time at the Conservatoire she has played numerous operatic roles, including The Countess (The Marriage of Figaro) and Erst Damme (The Magic Flute) by Mozart and Marenka in Smetana's The Bartered Bride. This year she played the role of Elizabeth Hayward in the opera Banished by Stephen McNeff which follows the story of a group of female convicts on board a ship bound for Van Diemen’s Land in the 1780s.

She is delighted to perform for live audiences again as the restrictions are finally lifted and she looks forward to participating at new and exciting collaborations and musical events.