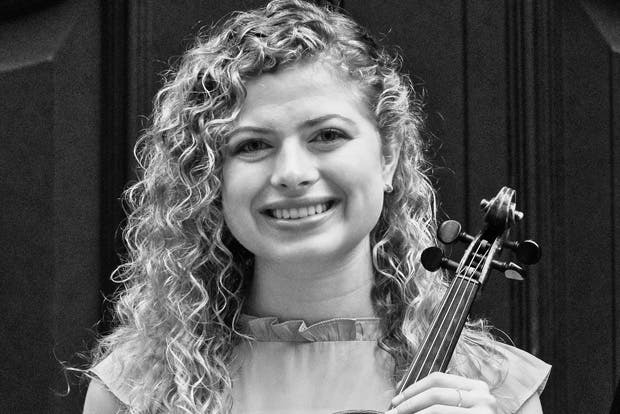 Emma Crooks is a bassoonist currently in her fourth year of her undergraduate degree, studying under Nikolaj Henriques and Gareth Twigg. In March 2022, she was the winner of the Nicholas Hunka Bassoon Prize.

Originally from Hampshire, Emma started playing the bassoon at the age of nine through her local music service. She has previously been a member of several Hampshire ensembles such as the Hampshire County Youth Orchestra and Chamber Orchestra, which gave her the opportunity to perform regularly in venues such as The Anvil and Winchester Cathedral. More recently she has been a member of the CBSO Youth Orchestra, alongside several performances in the RBC Symphony Orchestra. Emma is also a keen chamber musician and enjoys playing regularly with her wind quintet, Millennium Quintet.

Simònne Viljoen is a South African violinist from Johannesburg, currently in the final year of her undergraduate degree at  Royal Birmingham Conservatoire. She has been studying under the tutelage of Pavel Fischer and Caroline Pether. She has played with several South African youth orchestras, including Simfonia Juventi (which she led in 2016), the Johannesburg Youth Orchestra, the South African National Youth Orchestra (which she led in December 2016) and the MIAGI Orchestra, with whom she toured internationally in 2018. She loves playing with her piano trio (The Kisumba Trio) and string quartet, and she enjoys all things chamber-music related. In February 2022, she was selected as an ambassador for the Benedetti Foundation. She has been teaching since 2019 and is constantly looking for ways to develop her creativity and curiosity.