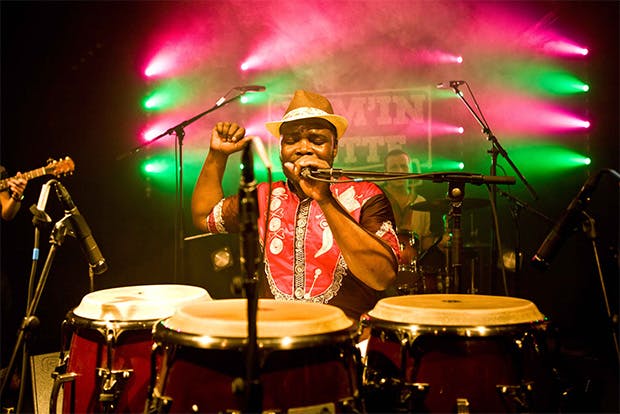 RBC Presents: Global Traditions: A concert series of folk music from around the world
Afla Sackey and Afrik Bawantu
Millicent B James

A night of uplifting Afrobeat from the infectiously joyful Afla Sackey and his incredible band. With support from vocalist and rising star of the composition world Millicent B James.

Afrik Bawantu was formed in 2007 by Ghanaian vocalist and djembe drummer, Afla Sackey.

With Afrik Bawantu, Afla brings his musical dream of blending traditional Ghanaian music with sizzling Afrobeat grooves to life, topping it off with an irresistibly funky twist.

Afrik Bawantu released their EP Noko Hewon in February 2013 to huge critical acclaim, and have since been nominated in the World Music Network’s charts. In 2014 their highly anticipated debut album Life on the Street shook up the new music scene with the unique and original style of Afla Sackey’s compositions. Currently the band is preparing their next album to be released this year.

Afla started his creative life as a dancer with the Bukom Ensemble of Ghana, known for their infectious folk-driven rhythms. Afla’s elders soon recognised the musical potential of this youth and encouraged him with careful guidance and training. This provided the foundations upon which Sackey has developed his career in music and dance.

Henceforth Afla came to London with Kakatsitsi Master Drummers of Ghana and has since thoroughly involved himself in the UK music scene. With his wealth of music and dance experience, Afla is an inspiring educator, having been Afrobeat teacher at the Royal Academy of Music, and continuing to be a guest lecturer in universities as far flung as Japan, Singapore and Argentina.

Alfa’s talent has been recognised by many well-established musicians whom he has collaborated with and recorded as a session musician. Great artists such as Sun Ra, Ginger Baker, Seun Kuti, Sons Of Kemet, Tony Allen, Yaaba Funk and Dele Sosimi.

"a thorough disregard for genre makes for an unbridled ride"
Pinkwafer.club

"She has seamlessly interwoven a myriad of sounds, drawing inspiration from gospel, jazz, soul, contemporary classical, ambient and afro music, and the result is truly outstanding"
Original World

RBC Presents: Global Traditions continues with a full afternoon of Folk Music on 19 March and The Conservatoire Folk Ensemble in concert on 27 May.