Ticket includes entry to The Sal Broughton Band in East Side Jazz Club at 10:15pm 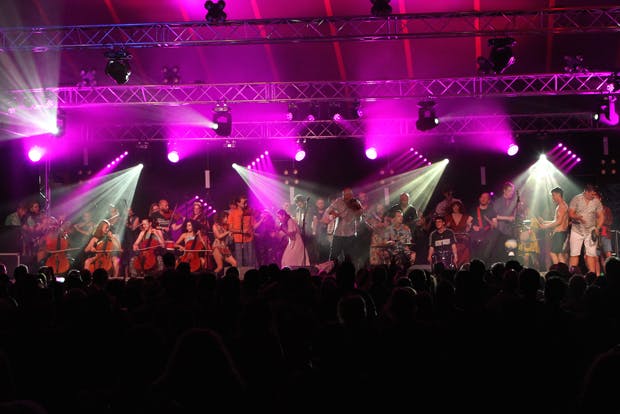 The UK's biggest folk band, The Conservatoire Folk Ensemble, stage their 25th Anniversary concert on 14 May 2022 at Royal Birmingham Conservatoire.

As well as the full concert by the present touring line-up of the ensemble, alumni from the past 25 years will join the band for a spectacular finale. This will surely be the biggest Folk band ever to be seen, with well over 100 musicians.

"Truly the most joyous noise I have ever heard and re-affirming my faith in the potential of the human race." Jon Bens

Formed in 1997 at Birmingham’s prestigious Conservatoire by fiddle player and arranger Joe Broughton (The Urban Folk Quartet, The Albion Band, Joss Stone), the Conservatoire Folk Ensemble have established a reputation for creating energetic and powerful shows, everywhere from the Royal Albert Hall to New Street Railway Station. Their increasingly popular live appearances - especially at such festivals as Cropredy, Towersey, Shambala and Kendal Calling - have left audiences ecstatic and even (at Towersey) moved to tears.

Still based at Royal Birmingham Conservatoire, the personal influences of each member shapes the set-list, as traditional English and Celtic reels slide into full-on rock grooves, funk, jazz, hip-hop, ska and reggae. Eastern European and Asian flourishes can also be heard, reflecting the rich cultural heritage of the group.

This is very much 21st century folk.

Ticket includes entry to The Sal Broughton Band in East Side Jazz Club at 10:15pm

This is ‘Power Folk’.

“There’s subtlety, poignancy, variety and more than a soupçon of talent. You’ll like this, like it lots I know you will.” fRoots