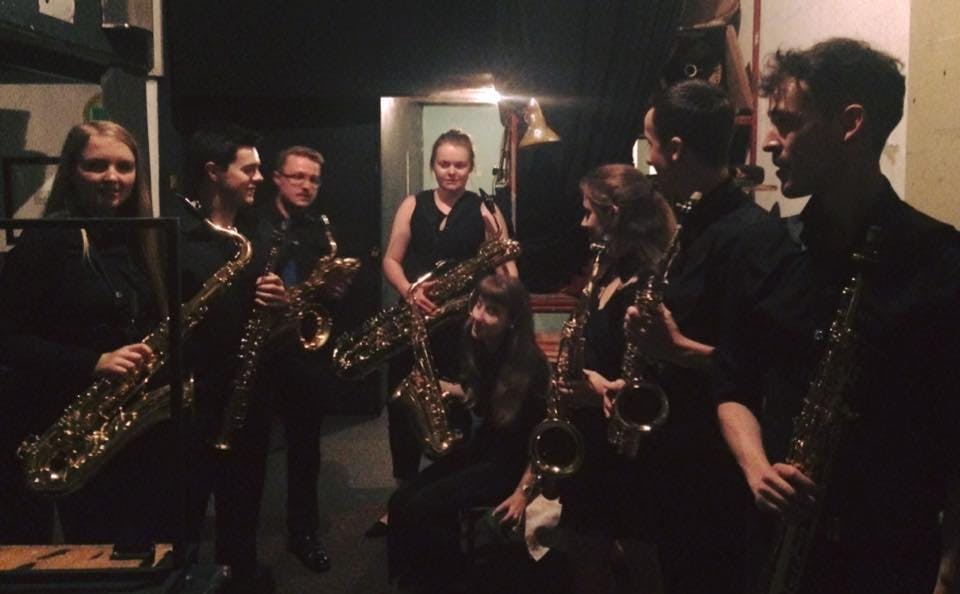 The Royal Birmingham Saxophone Ensemble and Octet perform across each academic year, both at the conservatoire and further afield. Performances are generally project based and aim to provide students with a stepping stone between small chamber music and larger ensemble playing, whilst giving opportunity to gain experience on all members of the saxophone family. The RBC team of Visiting Tutors (Naomi Sullivan, Andy Tweed and Anna Brooks) each lead projects to provide opportunity to learn with difference approaches and in different styles and genres.

Since 2008, projects have included – Crossing Paths: new music of Johannesburg, JTV: Cloud Cuckooland, “Hello, Mr Sax!”, The Sounding Image, Viva Vivaldi, Less is More, Travelling Music, The Night the Buses Died, Hoe Down, Round the Star and Back and much more.

The ensemble and octet have given performances at Birmingham's Symphony Hall, Birmingham Museum and Art Gallery, Newport Music Festival and Stafford Music Festival. They regularly perform as part of the contemporary music series Frontiers, and have presented educational concerts as part of the conservatoire’s chamber music festival. Members of the group were heavily involved with the ensemble and chamber music sessions at the inaugural Royal Birmingham Conservatoire Saxophone Day, 2015.

In the summer of 2018 they premiered Michael Wolter’s Queer Concerto for 9 Saxophones and Symphony Orchestra in the Bradshaw Hall with RBC Symphony Orchestra. They also premiered new works at the World Saxophone Congress in Zagreb, Croatia. In March 2019, they were guests at Chetham’s School of Music celebration of 125 of Adolphe Sax and returned to Stafford Music Festival on 24th May for an evening concert. Their next performance will be at Birmingham Museum and Art Gallery on Feb 21 2020.

It is undeniable that the work of John Cage, in all its guises, has left an indelible and important mark in the world of music. As a pianist, artist, theorist, composer, a loquacious writer with a deep respect for Zen Buddhism: It is hard to summarise his life’s work.

Four5 was written in 1991 as part of a series of ‘number pieces’ (about 40 pieces) for various instruments - mostly traditional - but also for rain sticks and conch shells. The theory behind these works can best we understood from text from Cage’s autobiographical statement:

“In the late forties I found out by experiment (I went into the anechoic chamber at Harvard University) that silence is not acoustic. It is a change of mind, a turning around. I devoted my music to it. My work became an exploration of non‑intention. To carry it out faithfully I have developed a complicated composing means using I Ching chance operations, making my responsibility that of asking questions instead of making choices.”

I Ching and the philosophy of (Zen) Buddhism runs through much of Cage’s art and music, he goes on to say:

And with further relevant to the ‘number pieces’: “My music now makes use of time‑brackets, sometimes flexible, sometimes not. There are no scores, no fixed relation of parts. Sometimes the parts are fully written out, sometimes not”

In Four5 the instructions the performers have are: “Single tones in flexible time brackets for four saxophones or multiples thereof. The pitches do not sound as written. The intonation should be his own for each player. A unison will be a unison of differences. Sounds may be long or short. When they have duration the loudness should be soft. Very short sounds are free as to loudness, even sfz or ppp.”

The work was inspired by the post 9/11 trauma and the role of religion in the history of mankind: Is Jesus really coming? Isn’t it about time? The composition is based on sound bytes from the streets of New York: an angry street evangelist on Times Square and a small Salvation Army choir. The groove is based on looped baby talk from two Dutch girls: 18 months old Welmoed and 2 year old Amber.

"The overriding influence on this work is late 60s' psychedelic music and there are hidden references to some of classic recordings of that period. There are many rock influenced themes played in octaves or parallel fifths, as well as a dreamy, spaced-out central section. Much original psychedelic music was electronic but there was also the frequent use of the saxophone. Not only did Gong have a saxophone player but Terry Riley also played soprano saxophone, performing long, trance like pieces with an electronic delay system. However I am not sure how many members of today's audience would be prepared to bring sleeping bags, and listen to a work for 12 alto saxophones, lasting several hours. Another influence, on a short textural section in this work, is obviously European classical music from the same period.

There is a particular quality of sound when several identical instruments are playing together, whether unison lines or widespread harmony, and it is invariably rewarding to write for such ensembles. Previously I have composed works for 5 alto saxophones and 4 tubas." Ian Stewart

Traditional, arranged Ian Stewart Make Me a Pallet on the Floor

A 2019 arrangement of a New Orleans folksong that can be traced back to the19th Century. The origins of the song remain unknown. Ian Stewart was commissioned to arrange this for a Mississippi based youth saxophone club. After the premiere in Mississippi, tonight is the work's second performance.

The music of the Chicago based composer, Marc Mellits is frequently performed in the USA and further afield. He writes often short works, often contrasting driving, rock based rhythms alongside long, sweeping melodic lines. His composition is very much influenced by minimalism, post minimalism, funk and rock music.

In his own words: “Writing music is the ultimate joy. I love listening to music, but I love writing it even more. It is a game of pitches, rhythm, sound, and silence; finding the hidden music beneath the blank music paper, and then playing with it, shaping it, honing it, so as to communicate directly with the listener. I want my audience to be immersed in the music, to have communication on a personal level. I love to fit the instruments together in unique ways, to have them rely on each other. Often in my music, the individual instrumental parts themselves only paint a small portion of the picture. It is only the combination of instruments that reveals the overall musical architecture. My goal is to explore musical material and musical processes that embrace the idea of each voice working together to create a whole far greater than just the sum of its parts.”

Ex Machina is the result of a 2016 consortium of seven USA based saxophone quartets. Each movement is inspired by each of the quartets.

Matthijs Van Dijk Can We Talk About (UK Premiere)

Matthijs Van Dijk: "I haven't written a program note - there isn't much really to say other than there was a point recently where I kept having certain phrases stuck in my head in a loop, two of which I based the piece on, in an attempt to "release" them from my brain. (I'm not sure where both of them come from, but I think the "Ladies and Gentlemen" was due to a lot of performances my group was doing and the talkies I would do during the show, and the "Can we talk about" comes from a composer podcast I was presenting and after 17 weeks of asking the same questions, had that particular phrase deeply engrained. However, I kinda approached the phrases a little bit in the zeitgeist that is our current world - we've got a lot to talk about... If you want to say any of this in the concert, go for it, otherwise I think it works kinda well without putting any implication on the phrases, leaving it up to the listener to add their own interpretation to what's going on in the piece."