Staff & students are eligible for a limited number of free tickets for events at Royal Birmingham Conservatoire events. 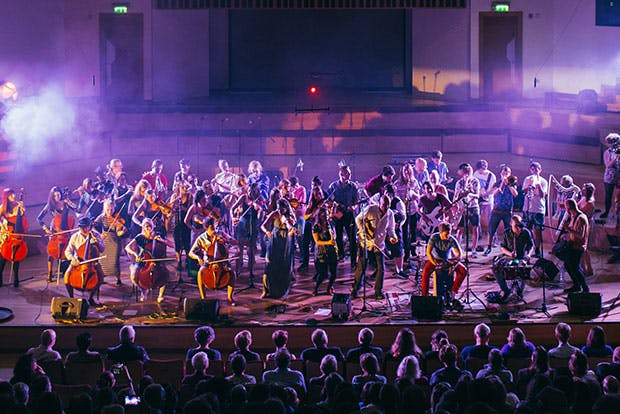 The Conservatoire Folk Ensemble’s energetic and powerful live sets are a sight to behold, featuring an 18-piece horn section, five cellists, seven percussionists and five electric guitarists, plus fiddles, flutes, clarinets, euphonium, and accordions! They also all sing too.

Though rooted in traditional folk tunes, the personal influences of each individual member steers the set, pulling in everything from full-on rock grooves, to funk, jazz, hip-hop and reggae, to sounds from Eastern Europe and Asia. It’s a sound they’ve dubbed ‘Power Folk.’

Formed in 1997 by fiddle player, arranger and tutor Joe Broughton, The Conservatoire Folk Ensemble have played dozens of major music festivals, released four lauded albums, established their own annual mini-festival, packed out the Royal Albert Hall, become an online sensation, and provided the launch pad for countless other acts and collaborations.

Featuring dazzling work-outs with all 80 musicians alongside hushed intimate solo performances, here’s a rare chance to really experience the shape-shifting collective in all their spectacular glory as they play a full two-set show for the first time on home turf in over a decade.

"Truly the most joyous noise I have ever heard and re-affirming my faith in the potential of the human race." Jon Bens

“There’s subtlety, poignancy, variety and more than a soupçon of talent. You’ll like this, like it lots I know you will.” Simon Jones, fRoots

“Painted is an absolutely superb, inimitable and totally unmissable album that should have a copy in each and every home.” Joe Knipe, Artree