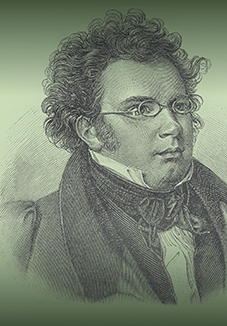 Birmingham Conservatoire presents a unique opportunity to immerse yourself in the music of one of the greatest musical figures in history.

With some five concerts each day, students and staff explore the diverse richness of Schubert’s music including well known chamber music favourites such as the Trout Quintet, Death and the Maiden, Rosamunde and Octet in F major as well as piano trios, string quartets and many rarities.

Music for the piano (for both two and four hands!) permeates the week, the acclaimed Schubert interpreter Christian Blackshaw (see over) joins us to give a recital and the late Piano Sonatas are performed in three 'late night' concerts.

Schubert’s glorious vocal music is presented by students in a Liederabend as well as performances of his two song cycles Die Schöne Müllerin and Winterreise, which brings this remarkable week to a fitting close.