City of Sounds: Music to Go with BCMG and Via Nova

City of Sounds: Music to Go with BCMG and Via Nova 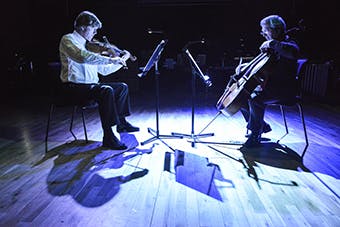 Originally formed by players from within the CBSO, Birmingham Contemporary Music Group (BCMG) is now established as one of Europe’s leading ensembles with a reputation for brilliant performances, ambitious commissions and innovative collaborations. Before the opening of the CSBO Centre in 1998, the Adrain Boult Hall was a home to BCMG with the majority of their concerts being presented there. Inviting BCMG back to present a final concert in the hall for City of Sounds therefore represents a very special festival event for us.

With their core work revolving around the commissioning and performance of new music, BCMG work closely with the Conservatoire's Composition Department, this partnership representing a natural extension of that purpose. As well as running workshops for Conservatoire composition students, BCMG players regularly undertake read-throughs of student works, giving young composers invaluable feedback and the benefit of experience within a professional context. The Conservatoire’s contemporary music group, the Thallein Ensemble, receives ensemble coaching from BCMG’s visiting conductors and composers, as well as BCMG players, and many of the Conservatories' Composition tutors work closely with the ensemble in professional contexts.

The programme presented in this festival concert has been carefully selected to celebrate these links and connections: BCMG's founder Ulrich Heinen commissioned Six Figures from Howard Skempton, both of whom are also tutors at the Conservatoire. Composer Charlotte Bray is a Conservatoire graduate and Honorary Fellow. BCMG pianist Malcolm Wilson, who will also play the  Celeste in Feldman's Rothko Chapel is the Conservatoire's former Head of Piano. The Jola's piece and title piece for the concert, was originally written as a memorial, and said to be one of Howard Skempton's favourites.

Joining BCMG for the final two pieces, Via Nova are a chamber choir specialising in contemporary music repertoire. Their work with BCMG also demonstrates another wonderful collaboration - Via Nova are managed and directed by two Conservatoire graduates and formed of Conservatoire student and graduate vocalists.