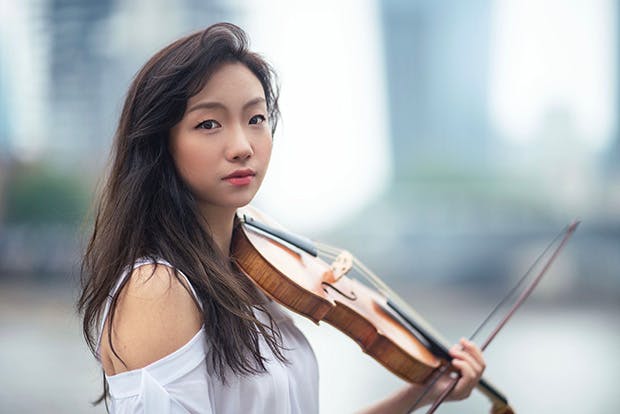 Acclaimed for her “dramatic, but sorrowful and bittersweet, compelling sound,” by America’s National Public Radio, Korean-American violinist Christi Park is known for her strong brilliant sound and versatility. Specialising in early 17th century to new contemporary works for historical instruments and voice, she has appeared in some of Europe’s and the USA’s most prestigious venues as both soloist and chamber musician.

As both performer and researcher, Christi recently won the 2021 Jose Herrando International Baroque Violin Competition and the 2021 United States Artists Award in Chicago. She is currently undertaking her Masters of Arts in Musicology as a 2021-2022 Aspiring Researcher Award in Music and Performing Arts at Royal Birmingham Conservatoire. Her research lies in highlighting the pedagogical aspects of the 18th century, particularly studying one of the greatest violinist and pedagogue of the time, Guiseppe Tartini.

Christi graduated her Bachelors from Indiana University, as a Premier Young Artist Scholarship holder, under Ik-Hwan Bae and Mauricio Fuks. She aspires to become a great teacher, who advocates passionately for the discovery of one’s inner voice. For this reason, she was one of Mauricio Fuks’s teaching assistants during her time at Indiana, and is now a visiting professor at the Belgrade Baroque Academy. Subsequently, she completed her Masters at the Royal Academy of Music, studying Historical Performance with Pavlo Beznosiuk and Simon Standage, as well as an Artist Diploma at the Royal Conservatoire of the Hague with Ryo Terakado, Enrico Gatti, and Shunske Sato .

Christi enjoys playing as a chamber and orchestral musician, performing with various ensembles such as Les Arts Florissants, New Trinity Baroque, Seicento Stravagante, and many other projects under the leadership of Phillipe Herreweghe, Trevor Pinnock, Ton Koopman, Masaaki Suzuki, Sigiswald Kuijken and Rachel Podger. As a contemporary artist, her love and passion for Korean traditional music and theatre has led her to her ongoing project, The Pansori Project, the reconstruction of the solo voice on baroque violin with composer and harpsichordist Jung-Woong Oh, sponsored by the DNA Contemporary Music Festival in London.