Meet our determined final year BSc (Hons) Computer Networks and Security student, Aksa Saleem, who has successfully secured her first graduate role in Brighton! Aksa tells us about the whole application process for her new role; how she feels moving to a completely new city and valuable advice for students applying for similar roles.

“I have secured a graduate role with a company called Edwards. It will be a Networks and Security role based within the Information Systems department.

The application process was an online application form, followed by some situational judgemental tests. I was then given a telephone interview, which was more of a formal conversation to get to know me as a person. Whilst I was on the phone, I was offered an invite to the assessment centre, which was all arranged by the company themselves. The day after this, I got a phone call asking to speak to get to know me just a little bit more. I then spoke to the Vice President of the IT department, who then made a new role just for me! This isn’t something many companies do. I was then offered the role after this conversation.

As this will be a new role and something more tailored to myself and my career aspirations, it will consist of me being a part of the Networks and Security team. I am really looking forward to being able to utilise the skills from my degree in my new role and to continue building on my knowledge. I will be working on several projects and will have the opportunity to travel abroad within their graduate scheme.

Inevitably, I do have mixed emotions about moving to a different city for a new role. I am really excited to become even more independent than I already am! I have never moved away from home, so for me to explore myself and to be able to properly stand on my own two feet will be exciting. However, I am also scared, because as much as I do a lot of things on my own, Brighton is not a quick drive away where I will be able to come back so often, especially because of the close bond I have with my parents. Admittedly I am very happy, especially as I’ll be by the beach! 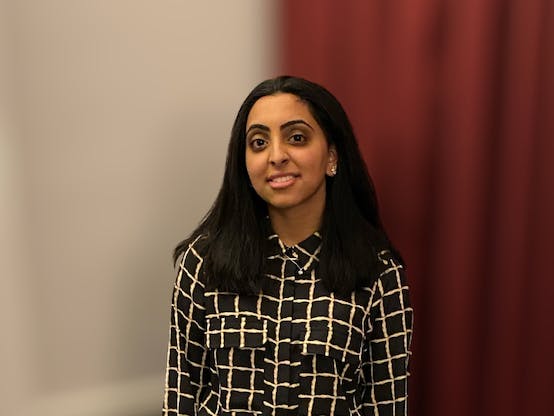 I didn’t know that I wanted to study the Computer Networks and Security course specifically. However, I knew I wanted to study and work in the IT industry, but that’s about it. I have always been, and still am, very handy around the house, not the ‘girly girl’ that a lot of people assume. My dad influenced my choices in a very positive way as I have always helped my dad, either with cars or anything practical around the house. He once said to me, ‘Do something you love and do not listen to what anyone else tells you’, which was the best advice I had with regards to pursuing my dream career! This is because I came to Birmingham City University’s Open Day and found my love for Networking and Security; as it is such a practical course, there are so many opportunities for me to build my career on.

Since my very first day at the University, I was given support from every angle. I was able to become a student ambassador, where I have completed so many extracurricular activities as well as being a student representative. In my first year I travelled ALONE for the first time to Paris! Paris was amazing as I got to make friends and meet people from not only BCU, but universities across the country. I would not have been able to do this if it wasn’t for the University’s Student Union pushing me and me also making friends as part of my student ambassador role.

In addition to this, I have also completed my Gradate+ Award, which is integral when you’re in your final year looking for graduate roles or schemes. Being a final year student myself, I have attended interviews and had my Graduate+ Award which amalgamates all of your experiences, jobs and extracurricular work you have completed. Every employer I’ve showed this to always says, ‘Tell me more’, because when I graduate it won’t just be my degree, it will be my certificates and how I have grown over the four years as an individual. All of these skills showcase how I obtained my graduate role. BCU has enabled me to grow in order to become an independent young woman, to make myself proud and for me to leave the University with my head held high for everything that I have achieved during my time here.

Lastly, the advice I would like to give to fellow students’ is quite simple and cliché, ‘If you want to do something, don’t let anyone stop you and always believe in yourself, it takes a while but it’s worth it.’ There is so much support out there in the University that can help you get to where you need to be. Don’t be afraid to ask!”


Find out more about our courses

Should I study Cyber Security or Digital Forensics?

What you can do with a Computer Games Technology degree