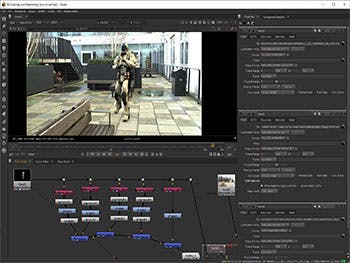 A new half-term programme, VisFX Camp, has been launched to give sixth form and college students across the Aimhigher West Midlands network an opportunity to learn digital skills and find out more about the exciting careers that a degree in visual effects could lead to.

Visual effects is a growing industry worth billions globally, which means lots of job opportunities for those who are interested in technology, computing, art, games and film. Many people typically associate visual effects with creating scenes in movies and TV shows, but due to the increasing demand for virtual reality, visual effects shares a lot of technologies with games, commercials, theme park rides, education, architecture, medical and more - making it an attractive degree to study at university.

Students across 19 different institutions signed up to the VisFX Camp, which took place online during the October half-term week. They were tasked with compositing a rendered motion capture together with several elements onto a background video to create a believable visual effects shot using Nuke. Students were provided with free licenses to be able to access the software and were shown how to do basic compositing in order to complete the task by Visual Effects Course Leader, Lianne Forbes and Senior Lecturer, Mat Randall. Support was available throughout the week via the discussion forums on the site with a live session delivered at the end to give feedback on the work.

After completing this course, I am more open to doing a degree in Visual Effects.
Year 13 pupil

The VisFX Camp was a huge success and three people were highly commended for their work. The course team, Mat and Lianne, also held a Q&A with students to answer any questions they had about the activity, course and industry careers.