Business School student Conor Dennehy talks about his time in Barcelona as part of the Erasmus scheme.

If you’re reading this, then it means you’re considering taking part in the Erasmus Programme! My first piece of advice? Do it. Erasmus changed my life (yes, I know, very cliché) but it’s true. I had the most incredible experience meeting people from across the globe who have gone on to become some of my closest friends; I was also fortunate enough to meet an amazing girl who I now call my girlfriend! In this blog post, I will walk you through my experience from beginning to end and hopefully give you a better insight into the Erasmus experience.

Before Erasmus began – preparing in the UK

My plane ticket was booked: a one-way ticket to Barcelona. I was excited but also slightly nervous - I was moving to a new country all by myself! However, I was reassured knowing that thousands of other students were embarking on the same journey. In the weeks before I was set to leave, I started to join Erasmus Facebook groups. These groups were useful for information about welcome events, student housing agencies, and general information about the city. It’s also a great way to get talking with other students who will be studying in the same city.

I made friends with two people through the Facebook group who became close friends when I arrived in Barcelona.Having said this, don’t worry if you don’t make friends via Facebook groups, as there will be plenty of chances when you arrive in your new city! When packing my suitcase, I made sure I had some essentials: medicine from my home country, a variety of clothes for the new climate, EHIC (European health insurance card), Travel Credit Card, and personal and sentimental items for my bedroom. With my suitcase packed and my flight fast approaching, there was one final thing – a goodbye party with my family and friends before my adventure began.

Arriving in my new city

After a two hour flight from Birmingham to Barcelona, I arrived at El Prat Airport. I was so excited to be starting this new adventure - it felt surreal that this new city that I had never visited before was to become my new home for the next 10 months. I left the airport in a taxi, heading towards a hostel that I had booked for my first few nights in Barcelona whilst searching for a flat and flatmates. I arrived at the hostel and checked in, unpacked my suitcase and made a to-do list for the week: visit flat rental agencies, attend any social events taking place and explore my new city.

My hostel had a common area, which was great for meeting people who may be in the same situation as me. On my second night, I sat in the common area searching for flats, and it was at this point that I met three other solo exchange students. There was a girl from Canada called Erin (who would later go on to become my girlfriend), a Portuguese girl called Maria, and a Dutch guy called Alex. It was super easy meeting new people in the hostel. My first ten days mainly consisted of me searching for a flat, meeting new people through the many events that were hosted and, of course, a lot of drinking and partying (if you’re not much of a drinker, then don’t worry. I attended events that didn’t involve drinking and met many cool people).

You may be thinking, why is he still in a hostel? Well, it was difficult for me to find the perfect flat, not because Barcelona is limited but because the city is a popular Erasmus Destination and I had left it late to find a place. There were plenty of options available, but I was looking for something particular and was trying to stick to my budget. 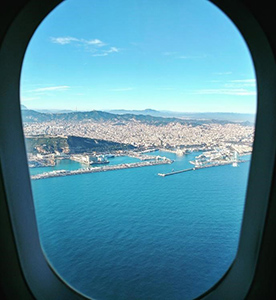 After a few weeks, I was settled into my new flat. I must admit, during my first few weeks, I was a little worried – What if Erasmus is not everything I thought it would be? Will I like the people I meet? Maybe 10 months is too long?

It didn’t take long for me to push those worries aside. I fell in love with Erasmus almost immediately. I met so many cool people during my first few weeks, through events such as welcome dinners, pub crawls, cultural visits, tandem nights (language exchange) and lots of fun activities organised by ESN (Erasmus Student Network)  - there was something for everyone!

It was great to experience life at a different university; I was studying my courses in English but learning Spanish in my own time, so I would normally grab a coffee or beer in a café somewhere and spend an afternoon studying Spanish.

My classes were a mix of local and international students which was great, as local students could give us a real feel for the city and international students were always up for exploring the city and taking trips to other parts of Spain. You will have plenty of opportunities to travel around your chosen country or surrounding countries when you’re on Erasmus, whether this is a spontaneous trip with other students or planned trips with other exchange students.

The best thing about life on Erasmus is definitely the people you will meet! I met so many amazing friends during my 10 months, and I now have some of my favourite memories with them -the crazy parties, late-night chats, fun days out and the shared love for travelling and meeting new people!

Leaving Barcelona was very emotional, something that I didn’t expect. My final night was spent on the beach with some of my closest friends saying goodbye. We spent the whole night there; drinking, singing and sharing memories of our incredible time in Barcelona.However, although we were all leaving, I knew we would see each other again, and I now had friends from across the globe.

When I arrived back in the UK, I had a renewed sense of confidence, a desire for more travel, and I was more employable. Employers like that fact that a student has studied abroad, it shows independence, adaptability and resilience! It’s a win-win when you study abroad. You’ll have a marvellous and unforgettable time and have an advantage in the graduate market.

Before I go into some travel safety tips – It’s good to know that nearly 19 million British nationals visited Spain last year. Most visits are trouble-free. That being said, it is essential that you check out the Foreign and Commonwealth travel advice for your chosen country before leaving the UK. There were several incidents of petty crime in Barcelona that some exchange students were victims of. Below I have included my tops safety tips:

Why Birmingham is THE place to be for Hospitality Management

The biggest esports tournaments in the world

6 reasons why Birmingham is the best city for business students

Accounting vs Economics vs Finance: Which degree is right for you?