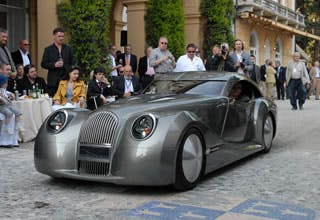 The Knowledge Transfer Partnership (KTP) was lucky enough to recruit an Associate, Matthew Humphries, who had already worked at Morgan on a student placement, proving his credentials by designing a concept car, the AeroMax (which was well received at the 2005 Geneva Motor Show).

The Aeromax cost £2m in development and was built on an existing platform. This highly-effective KTP project provided Morgan with a proactive, controlled design process, facilitating the creation of innovative concept and production vehicles to stimulate the market and attract new customers to the brand.

The new design process has helped to ensure that design details are cost-effective and fully appropriate for the Morgan production processes. Its efficacy was proven in taking the AeroMax from concept prototype to low volume production, delivering a vehicle that offers a major leap forward for the company in terms of quality and design detail. All 100 of the cars were pre-sold, which generated £9m revenues and £2million profits representing a 24% return on investment.

Being able to render ideas more quickly has enabled key decisions to be made before committing to expensive model-making, whilst improved build accuracy has reduced rework and vehicle revisions, minimising costs. Morgan’s enhanced design capabilities have also impacted on its existing vehicles, increasing their customer appeal and boosting sales, with over £4.2 million turnover attributed to KTP work.

I was extremely excited by the prospect of this third KTP to help enhance Morgan’s capabilities in concept design. The stunning LIFECar is a living example of what can be achieved through such collaboration

The Awards keep on coming for this powerful collaboration as during 2010, the value of a decade of knowledge transfer programmes between Morgan and Birmingham City University was recognised as regional winner for ‘Best Partnership – North West’, at the KTP Awards

Prior to this, Morgan had already gained a Lord Stafford Award for Achievement in Innovation during 2007. The conclusion of their third Government-supported KTP saw the national panel recently award this programme its topmost ‘Outstanding’ grade, matching similar recognition given to their first KTP, concluded two years earlier. The second, longer KTP programme, which successfully increased the efficiency of Morgan’s manufacturing processes, had also been highly rated.

The launch of the LIFECar has now led onto a fourth KTP which seeks to turn the concept into a road-going reality. This double graduate-associate KTP-programme is seeing Birmingham City University co-ordinate a multi-universityprogramme through collaboration with Oxford and Cranfield universities, to develop Morgan’s LIFECar over a three-year period.