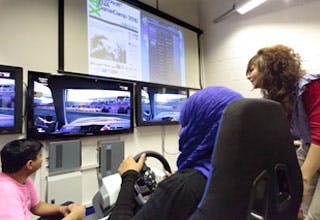 At over £2 billion in global sales, the UK’s video games sector is bigger than either film or music industries, and visual effects, the fastest growing component of the UK’s film industry, grew at an explosive 16.8 per cent between 2006 and 2008.

Despite the challenges in the games industry, which is fiercely competitive, traditional games development companies have a requirement to recruit talented and able graduates. Despite there being 100+ games degrees in the UK, games companies struggle to find adequately skilled graduates to employ with confidence, a problem recently highlighted in the Livingstone/Hope report produced for NESTA in February 2011. The report stated that only 12 per cent of graduates with a video games degree find a job in the games industry within six months after graduating and 58 per cent of video games employers report difficulties filling positions with recruits straight from education.

The Gamer Camp approach, built with significant input from Codemasters, allows students to work on a live project as if they were at work, allowing them to learn the necessary practical and technical skill sets, in a safe studio simulated environment. In effect students on Gamer Camp get their first experience of working in the games industry.

The Gamer Camp programme is designed to provide graduates with a unique opportunity to get real ‘hands on’ experience of developing video games in a ‘simulated’ industry environment. Having recruited a host of graduates over my career, I’ve found that their skills grow enormously as a direct result of working through a complete game development cycle. The Gamer Camp programme is designed specifically to provide this experience."

Following on from the successful pilot, a suite of three Gamer Camp programmes has been developed during 2010, including a 10-week Gamer Camp called Gamer: Mini, in collaboration with Sony, and Gamer Camp: Pro, a nine-month programme leading to an MA qualification.

As a direct result of this innovative approach to developing skills for the games industry, Birmingham City University's Gamer Camp was recognised in the Livingstone Hope Report 2011 as a best practice example of an education solution that provides the games industry with appropriately skilled talent.