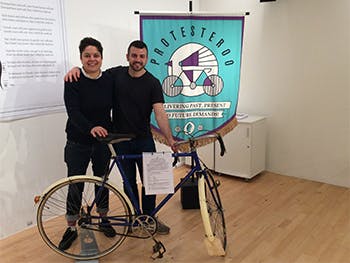 Students and staff at Birmingham School of Art took a late 19th Century social reform movement as inspiration for a weekend of workshops that took place at Tate Liverpool.

The Three Day Work-Out took the activities of the 19th Century Clarion Movement – communal cycling, singing and publishing – and presented them in a fresh way in a series of events that explored today’s connections between work, social movements and free time.

As part of the Work-Out, cycle choir group Protesteroo sang messages of hope and resistance in public locations around Liverpool.

Alongside the cycle protest, programmed events at the Tate included a film screening, a self-publishing workshop and sing-along performances from BCU's Angry Margaret Protest Choir with Infinite Opera and the Liverpool Socialist Singers.

Lecturer Gareth Proskourine-Barnett and the School of Art’s BAAAD Press delivered a zine-making workshop, where participants were invited to make a short magazine around the themes of the Three Day Work-Out and connect with the Clarion Movement and its legacy.

The Work-Out was led by Senior Lecturer in Art Theory Dr Nuria Querol and Lecturer in Art and Design Demitrios Kargotis, and marks the half-way point of the Tate Exchange Project, a key partnership between Birmingham School of Art and Tate Liverpool.

Dr Nuria Querol said: “Three Day Work-Out was a unique project that invited the public to engage with the themes of work, social movements and free time in an imaginative and creative way. It has been a brilliant opportunity to work with Tate Liverpool, colleagues and students at Birmingham School of Art, and external groups and universities.”