The Space Between Gender – RBSA

Yasmin is a student at Margaret Street studying MA Fine Art. She’s currently showing work at the RBSA after participating in the New Art West Midlands Exhibitions and winning the Solo Show prize.

Bio: My practice tackles gender stereotypes by utilising the symbol of the circle. The circle, the orb, the hole, the piercing is an obsessive compulsion within my practice and forms, with its long reigning connection with women. Personifying the anxiety and patriarchal control of woman.

The work displayed at the Royal Birmingham Society of Artists (RBSA) – Unskinned corsetry enters stage right, 2018 is the assemblage of a mechanical sound in a non-verbal conversation with a static, brass spherical sculpture which has been laced with a crude bitumen screen print, illustrating sections of a woman’s dress makers pattern; moulded into a de-skinned body that reflects ideas of corsetry and engineering. In flight, the orbicular form attempts to amplify the suppression of the female voice, translating the smothered claustrophobia of the tightened sculpture. The abstracted body is staged in the foreground with the sound echoing in the background, thus becoming the inner workings of the feminine structure; unskinned and deconstructed, the mechanical sound heightens the scream of woman.

There is a compulsion to use traditionally male-associated processes to make my works, which sanction a decorative feminine nature, through the decadent use of metal and print. Referencing male art giants such as Richard Deacon with his aesthetic command over his materials and fixings, contrasted against my formulated conceptual structures, that echoes the cries of the woman. With consideration made to the ‘heavy metal sculpture’ of artists like Richard Serra, skillfully turning this stereotypically masculine aesthetic back on itself, imbuing it with a powerfully organic sensibility. This sense of making can be seen in the sensitivity and visual nature of the brass form ‘Unskinned corsetry enters stage right, 2018’. 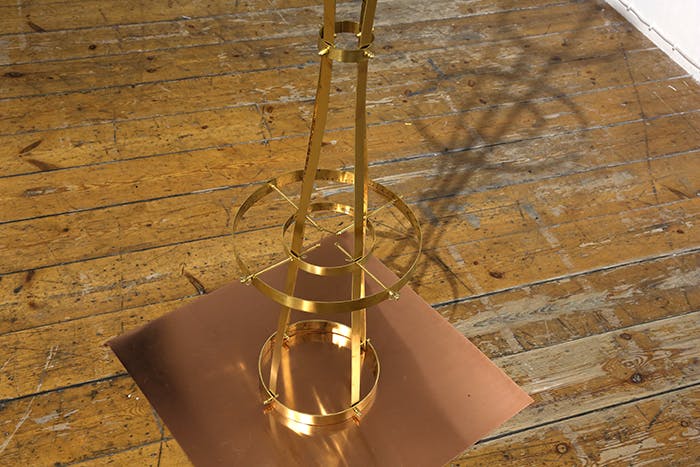 For more on Yasmin’s work please check out her website.

Which School of Art course is right for you?

How to prepare for your course

My first year at uni