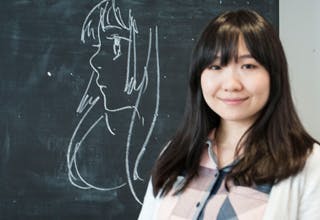 Excellence in sport or the arts

Yifan – more widely known by her pen name Buddy – has been creating manga comics professionally for 13 years. During this time, she has published more than 20 books internationally and her online manga story Guarding has been viewed by over one billion people.

Originally from China, Yifan chose to study in the UK to aid her development as an artist and further her career. Choosing Birmingham City University after a teacher’s recommendation, her continuing success as a graphic artist saw her win the Professional Achievement Award at the Education UK Alumni Awards, which celebrate the success of international alumni who have studied at UK universities within the previous 10 years.

Since graduating, she has built a reputation as one of the best-known comic book artists in China, with her work widely read in print and online, and Guarding now in line to be turned into a film.

“When I was 11 years old, I read my first manga and I was amazed because it wasn’t like anything else that I’d ever seen. I found that manga is a unique way to tell a story, and that was the point that I decided I wanted to be a manga artist when I grew up. I tried to draw like the other artists and started to learn manga by myself and then I started to draw my own manga and write stories for it. At first, it was OK but, within a year, it started to get difficult because I was really young and didn’t have any life experiences, so I didn’t really understand how people feel and how life and relationships work. I needed to meet more people and get inspired, so I decided I should go to another country to study.

“I really like the culture, the fashion and the art of the UK and I also really love English novels – the first novel I read was Jane Eyre and I found that fascinating. I felt the Visual Communication course at Birmingham City University was a really good one and that I would learn something new there. I’d never been to the UK before, so when I first arrived, I found it a very beautiful country and Birmingham is a really inspiring city – it has so much to see and everything was very new and different. Birmingham is a multicultural city, it has a big Chinese community and there are lots of people from overseas, so I found it easy to settle in.

“When I started studying illustration with my tutor Andrew Kulman, I was looking for answers because I didn’t know what stories to write. He said you should go and live your life, observe yourself and focus on your own feelings, and you will know what stories you want to tell, so that’s what I did and it turned out well; it totally changed my approach to storytelling. The next story I wrote was very different to my old work and it won a Macmillan Children’s Book award which really helped to grow my confidence.

“I also explored some new drawing methods here and discovered that I could do not just one type of drawing but lots of different styles. That’s why my comic style is unique and very recognisable for my audience, so they can look at my work and know it’s Buddy’s, not the same as the Japanese manga artists or even other Chinese artists. That was very important for me, as it really influenced my career.

“After I graduated, I went back to Beijing for a while, then I moved to London and tried to support myself with my own skills – I planned to stay for three months but I only brought half of my budget, so I had to find a job and get paid. At first, it was really difficult – it’s never easy for an unknown artist to find a job in London, but after two weeks I met a publisher at a comic expo in London, who agreed to publish some of my works in the UK. Also, a singer commissioned me to do her album artwork, so being in London really gave me something unique to take back to Beijing.

“I came home with a whole new approach to storytelling, from my experiences in the UK. Andrew’s advice was the most important thing I learned in the UK and it’s still really helping me right now as I do my stories. I always start with a story in my head – just the idea and characters – and I’ll talk about it to people like editors or friends or my husband! I’ll ask them whether they like a storyline, idea or character and they always give me suggestions. In total, I can finish about 15 pages a month. People are now reading comics on their cellphones and they do that really fast – you can read 30-40 pages in 10 minutes and people are always asking if I can do it faster. That’s how it is for artists today and it’s very different to just five years ago.

“In Beijing, I worked with magazines, websites and publishing companies to get my work published, to let people see my stories and now I’m one of the best-known comic artists in China and all my works are in the bestseller lists of comics. My latest online story, Guarding, has had over one billion views online and is now being turned into a film, so it’s all pretty good. I’d like to see more of my work being adapted into films or television shows, maybe even games, and I want to work with talented people from other areas like writers, filmmakers and musicians. Most of all, I want to draw better comics and I want more people to read them, not only in China but in the UK and around the world.

“I’m thrilled and very happy that I’m an Alumni of the Year; it’s an honour for me. When I first came to Birmingham City University I never thought about what I’d become or what I’d do after I graduated, so now after 10 years I feel that I’ve really achieved something with my career and as a person so it’s great.”