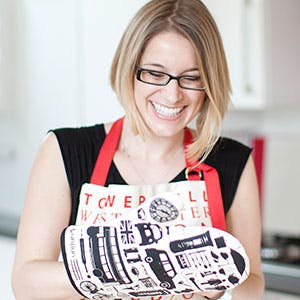 Having graduated in Fine Art, Victoria initially used her passion for photography to create her own range of greetings cards. She went on to work for branding and communication company BrandCulture and designed t-shirt graphics for Ben Sherman in Australia before establishing the Victoria Eggs brand in 2011.

The company ethos is to support British industry and celebrate the country’s rich heritage, and this passion for all things British comes through in Victoria's designs – many of which feature iconic London landmarks and cockney-rhyming slang.

The Victoria Eggs range of homeware and gifts is now stocked by over 200 retailers globally – including Selfridges, West Elm, Tate Modern, and The National Gallery. The company is currently growing into an international brand, with stockists in France, Russia, Switzerland, Australia and the USA. Annual turnover has grown to over £100,000, and Victoria has ambitious plans to expand her overseas markets over the next 12 months.

She said: “When I’m coming up with new products, it’s mainly a question of seeing what’s out there and what trends are becoming more popular – for example the success of the Great British Bake-off meant that baking-related items were suddenly very popular and I could react to that – but a lot of the time, it is just a case of working on my own instinct. The notion of Britain and Britishness is so wide, and the inspiration is limitless – I have so many ideas that I have to hold myself back a bit!

“This year has been great – developing the company and getting more shelf space in places like the Selfridges, London Transport Museum and St Paul’s Cathedral, and repeat orders are coming in which is great, because it’s hard to get in somewhere but even harder to stay! Next year, I plan to have a really big push overseas –I’ve been researching markets abroad, seeing what’s out there, and there’s a trade fair in Paris in January which has a huge waiting list but fingers crossed!”