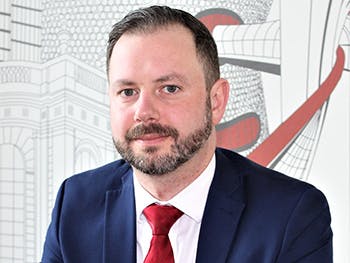 Tom is a partner in Quantem Consulting, specialising in quantity surveying and managing construction projects. He focuses on the industrial, commercial and advance manufacturing sectors, and has international experience in delivering Aviation projects.

Outside of his work at Quantem, Tom is active within the Royal Institution of Chartered Surveyors (RICS). Tom is an assessor, sits on the RICS West Midlands Regional Board and, in 2016, became the youngest RICS professional to become a Fellow of the RICS in the West Midlands.

“I was unsure about going to University, but then I had the opportunity to undertake a trainee Quantity Surveyor position which involved a part-time course at BCU. I got a First in my degree and became a Chartered Surveyor in 2010.

“Since then, I’ve had the opportunity to help shape some of the most prominent landmarks in the West Midlands. I am especially proud of being involved in JLR Engineering Manufacturing Centre UK in Wolverhampton – a national RICS Regeneration award winner in 2014.”

“In 2015, I joined Quantem Consulting and in 2017, I was promoted to Partner. When I joined, the business only had four employees in Birmingham – now there’s 21 and we’re involved in major projects such as the Paradise development. As well as management and business development, I’m still in touch with the hands-on elements of surveying, which is nice balance unique to a fast growing firm.

“As my career progressed, I got involved with the RICS – chairing the local Quantity Surveying and Construction Group. It helps to keep aware of new thinking, and allows me to have a say on the future of the profession.

“I was shocked, and very honoured, to be chosen as an Alumni of the Year. At my graduation, I looked up to alumni that won similar awards, so to now be one of those people is a real achievement.”