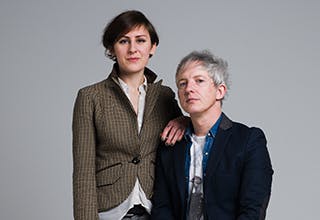 During their time at the University, husband and wife Craig and Rebecca started their own watchmaking company, called Struthers London, using traditional skills to create 21st century designs.

They secured a prestigious contract with Morgan Motor Company to make bespoke watches, launched at the Geneva Motor Show in 2014, which beat global competition to win commendations as Luxury Watch of the Year and Rising Star of the Year (WatchPro awards 2014).

Less than a year after the release of their first watch, the duo were recognised as two of the leading figures in British horology in the WatchPro Hot 100 Awards. They continue to help train the next generation of watchmakers by returning to the University to talk about their work, and have also come back to further their studies, with Rebecca currently the first watchmaker undertaking a PhD in horology in Britain.

They have been central to the regenerative movement to put the University and the School of Jewellery at the forefront of industrial activity in the Midlands, representing the industry at events such as Birmingham Made Me and meeting Prince Charles on his official visit to Birmingham’s Jewellery Quarter.

12 years ...is how long Rebecca has been studying at Birmingham City University

Their regular appearances at trade fairs and exhibitions has helped to raise the profile of the University, the School of Jewellery and the Jewellery Quarter. Craig and Rebecca’s association with Morgan has led to other high-profile jobs and the launch of their own range of products.

Rebecca said: "I'm from Birmingham so was already familiar with the Jewellery Quarter and had family who had worked in the industry through the generations. I was struggling at school and nothing was really gelling for me, and it was actually my air cadet leader, who was a jeweller, who suggested having a look at the School of Jewellery.

I went and just fell in love with it – it’s such a beautiful building, I thought this is for me and this is what I want to do. I then discovered horology which I’d never really heard of before going to the University – I transferred across and never looked back really.

Rebecca said: "When you move into creating watches, the Jewellery Quarter is a very supportive community. We use engravers, tracers, laser welders, CAD designers, casters – there's so many people we work with and that’s when you become a community because you're all inputting your niche skill into creating a much bigger object. We’re giving work to 20 to 30 people – we wouldn't survive without them and they wouldn't survive without us.

"In 2013, Beverley Nielsen from the University introduced us to Morgan at Birmingham Made Me, and the collaboration flowed straight from there which was incredible for us – going from this tiny company where we'd struggled by with no-one really noticing us to suddenly becoming award winners, then flying out to Geneva for the new launch for the Morgan watch. From then on it's just been a whirlwind!

"I wanted to do a Master's as soon as I finished my previous course, because I love education and one of my lecturers mentioned the MA History of Art and Design at Margaret Street. I managed to tailor pretty much every essay throughout the course and my dissertation to be about horology and that led to me being acknowledged by the Arts and Humanities Research Council, so I'm now on a scholarship for my PhD. For me it was a natural progression and I loved it so much that I said to Craig that he had to do it!

Craig said: "At first I wanted to study something completely different but then I had my eureka moment – we've got the workshop and access to tools and the studio so why not just continue the watch design and making, and make it part of my Master's? Struthers London basically came out of that and my work on branding, using us as a case study. The course worked brilliantly for me because it pushed me into an area I’d not really looked at before."

Rebecca said: "I now come in and talk to students about my research and career from time to time which is something I like doing. I always put the students in contact with people in industry as well – I had it from other people when I was there and I think it's the least you can do really."

Craig said: "Not being from Birmingham I look at where I am now and what it's done for me, I'm really pleased – I love the city. I think whether I end up here forever or not, I’ll always have a special place for Birmingham because it’s given me opportunities I wouldn't have had in London. In future, I'd like us to be able to get some funding to set up our own workshop."

Rebecca said: "It's funny because I've been here for so long now, this is my twelfth year as a student at the University which is incredible and having worked for so long here, I've had ups and downs, but the last few years really feel like everything's come together. It's taken a long time, so to finally get there and for someone to say we're doing well vindicates what we've done – it's a very proud moment."