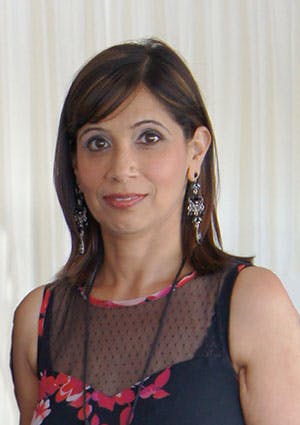 Raj Jhamat completed a BSc Dimensions in Health Care degree in 2012, and she currently works as a Learning Disability Liaison Nurse at Birmingham Children's Hospital. Her work to help children with learning disabilities has been praised by colleagues, who were so impressed that they nominated her for a Nursing Standard Award – which Raj won.

The award was in recognition of her work with Birmingham's South Asian communities to help families understand autism, which included producing a DVD in Punjabi, which used local patients to explain the condition. Raj was presented with the award in March 2013 by TV presenter Fiona Phillips and the Chief Nursing Officer for England, Jane Cummings.

This wasn't the first time Raj's work with children with learning disabilities had been nationally recognised – in November 2012, she was highly commended and came runner-up in the Child and Adolescent Services Award category in the Nursing Times Awards, as well as being shortlisted for the Nurse of the Year award. She was also recognised at the Birmingham Children’s Hospital Staff Awards in 2012, where she won the Innovation in Service Award, and has received a prestigious Queen's Nurse Award, which recognises individual nurses who demonstrate their commitment to patient-centred values and continually improving practice.

She said: "I commenced my employment with Birmingham Children’s Hospital NHS Trust in 2009, as part of their Child and Adolescent Mental Health Services for Learning Disabilities team, where I realised that some families from the South Asian community didn't fully understand conditions such as autism, what causes it and the needs of their children. That community required extra support, so I put together the DVD myself, with the approval of Autism West Midlands, which got quite a lot of attention and resulted in me receiving some awards.

"In 2010 I was given an opportunity to work in a hospital setting as a Health Facilitator for Learning Disabilities. This is where I experienced a gap in my knowledge of palliative care and in caring for someone at the end of their life while supporting their loved ones, which is why I came to Birmingham City University to do the Dimensions in Healthcare pathway in palliative care.

"It was an absolutely fantastic course – it's a very sensitive and emotional subject and the lecturers always acknowledged that. Often we see children whose needs are quite challenging, and the course helped me to understand what palliative care was, how to work with people when they're facing the end of their lives and how those general principles can be adapted to meet the needs of people with learning disabilities.

"For me, the recognition I have received from various people and organisations is an acknowledgement that I am doing my job the right way and reinforces that I'm on the right track and using the right approaches to make a positive difference for patients, and also their parents and carers. When I hear parents thank me, and saying that they feel they have been given their child back, it makes me feel happy and proud and if I didn't hear that, I would worry that I wasn't doing everything I could."

More about Dimensions in Healthcare courses