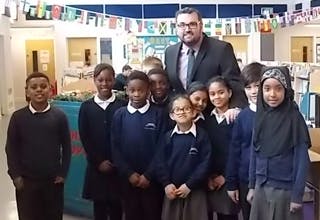 Paul Harris was appointed headteacher of Curwen Primary and Nursery School in East London while still in his twenties and quickly made an impact, with the previously struggling school being judged ‘Outstanding’ by Ofsted just three years later.

After turning round the school by reducing pupil exclusions, improving staff retention and building new links with the local community, he was then called on to share his expertise more widely by joining forces with another school in the area, and then by working on other projects for the local authority and the Department for Education.

His efforts were recognised in 2015 when he was named ‘Headteacher of the Year’ at the prestigious 2015 TES Schools Awards, and he secured further acclaim by being named one of Birmingham City University’s Alumni of the Year.

“I was attracted to Birmingham City University as the course and the University had a very good reputation, plus it was based in a city centre, which offered the potential of working with a variety of communities and people from different backgrounds. The teaching we received was excellent; it was a tough course, with us in University or on placement every day, but it was very well-organised, we all learned a lot and we left well-prepared to go into the classroom. I had seven teaching practice placements across the whole of Birmingham and I got something different from each of them.

“I went to Newham as a newly-qualified teacher and worked in a couple of schools there before becoming deputy head of Kensington Primary School and then headteacher at Curwen in 2006. In 2014, I also became executive headteacher of Kensington, initially on an acting basis. Going into management was something I’d always wanted to do but I hadn’t expected it to happen so quickly; however, I went in at a time when there was a shortage of teachers, so these opportunities came up and I was able to take them.

A central part of my philosophy at Curwen was bringing people together, both inside the school and within the wider community. At the time, there were on average 17 permanent exclusions of pupils a year, eight members of staff were leaving every term and our results were in the bottom two per cent in the country, whereas we’re now in the top 10 per cent. We had to turn around what was being done by restructuring the school and management systems, developing our teaching programmes and instituting a huge programme to extend the reach of the school so we went from literally three or four after-school clubs to now having 45 including breakfast clubs and childcare provision.

“Alongside my role there, I’d been doing work with a number of London authorities, where there were schools having difficulties, and then I was brought in to help at Kensington Primary School, where I’d worked before. From there, we decided to ‘soft federate’ the two schools so that we could use resources jointly and, in time, adopt some of the changes I’ve made at Curwen to hopefully benefit Kensington in the same way. The two schools combined have around 1,300 pupils which is bigger than most secondary schools, and both had building projects under way at the time so there was plenty to keep me busy!

“I am also now a School Improvement Adviser for the local authority, supporting other schools, as well as a National Leader of Education, where I support other schools which are having difficulties. I recently worked on the expert panel review for the Department of Education – the Rochford Review – which reviewed assessment for children who could not access the National Curriculum tests, and also an Ofsted Inspector for the London region.

“The opportunities of working in a larger group allows schools to work in effective partnership, learning from each school’s strengths to improve their own practice as well as looking at opportunities to save money and use resources more effectively to meet the needs of our pupils, who are always central to our core business. However, it is of utmost importance that we ensure that each of the schools keep their own identity in order to meet the needs of the very different communities that they serve. The main challenge to myself is the increased workload and also allowing others to make decisions that I would have taken in the past as well as the realisation that my job is very different now.

“It has been made very clear by the Government that over the next few years all schools will need to become part of an academy. Schools will need to carefully consider joining or forming Multi Academy Trusts as the role of the local authority will diminish and more schools will leave their central control pot. Funding will also be a major issue over the next few years as well as the recruitment and retention of excellent quality staff from a variety of training providers.

“In future, I plan to continue to develop a group of schools to work in partnership to ensure excellence for our pupils. This could be in many forms but school-to-school partnerships are key and I want to be at the forefront of setting up these partnerships to ensure good-quality education and support for our pupils, to enable them to receive the best possible life chances in future.

“Someone from the school put me forward for the TES award – I was on a shortlist of eight across the country, and I didn’t know the final result until the night. I was shocked, overwhelmed, very proud – and I really wasn’t expecting it as I was up against some very experienced headteachers, but it was a very nice shock.

I was also honoured to be named as an Alumni of the Year, particularly as it is for doing a job that I love – most of the time! The most rewarding aspect of my job is seeing the success of our children and their development. I really enjoy the challenge and the fact that every day is different. I know that there are a great number of other people who also work to ensure that our children have the best experience at school and become caring, co-operating citizens who enjoy their learning and strive for success.

“This award also means a huge amount to me as it recognises how much the University ensured that I was equipped to become a very successful teacher and leader in education. The teaching practice and teaching skills that I gained on the course I still use today, but what I also took from the course was the sense of a learning community, working together and having the support of colleagues, which is still very important to me now.“