Alumni of the Year 2012: Community Engagement and Leadership

Nigel Hanson has helped scores of young people develop their potential and raise their aspirations through the sport of basketball since establishing Birmingham A’s Basketball Club in 2003.

As a local resident and former professional basketball player in the late 80s and early 90s, Nigel identified with the issues faced by young people in his community and decided to provide them with opportunities to get involved in sport through volunteering. Working with young people from primary school age up to 25, Nigel helps a broad demographic, regardless of their background, and aims to create opportunities for all.

His work has brought young men and women into basketball and helped them move away from unhealthy lifestyles, gang culture or gun crime; something that he had first-hand experience of. Nigel himself was caught up in gang violence in his youth and his basketball career was curtailed when two bullets, aimed at another man, slammed into his leg and hand outside a nightclub.

“When I was shot, that was a turning point for me,” said Nigel. “Basketball turned my life around and I wanted to do the same for others.”

He decided to use the sport to reach out to other young people and keep them off the streets. “I’ve always known that you can engage young people through sport, particularly the demographic involved in gangs or gun crime.”

Nigel undertook his law degree in 2000, aged 30, and went on to study sports law and international sports law, as well as completing a Master’s degree in 2005. While at Birmingham City University, Nigel became involved in community sports activities and player/coached the University’s basketball team, leading them to victory when they won the British Universities Sports Association title in 2002.

He enjoyed a successful legal career after he graduated from Birmingham City University, having a landmark ruling in a case reported in the House of Lords in 2006. He worked in housing and employment law for five years, eventually becoming Head of Employment Law for the entire city at Birmingham Citizens’ Advice Bureau and then onto a Chief Executive Officer role at Trinity Housing.

But his passion for utilising sport for social change never abated and he now solely concentrates on developing his social enterprise full-time, as well as acting as an independent adviser and Peer Reviewer to the Home Office’s Ending Youth and Gang Violence programme which was put together after last August’s riots. 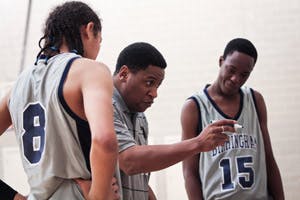 With Nigel’s expertise and dedication, the club has turned complete novices into national players and club champions, utilising basketball to turn lives around. By creating a community-focused basketball club playing at both the grass roots and national levels, Nigel has been able to recognise potential in others and ensure that those previously unable to access high performance sport have been given the chance and support to do so.

During his time at Birmingham A’s, Nigel has sourced funding to support community engagement and ensure the club’s outreach projects can go on providing coaching, health education and life lessons to youngsters in some of the most deprived wards of the city.

The club was awarded a major grant of £296,000 for its H.E.A.R.T.S. project – an initiative which provides a healthy living educational programme with professional sporting role models to children in primary and secondary schools.

Nigel has secured more than £500,000 over the last two years in order to provide positive outcomes through sport for deprived youngsters living in North Birmingham, enabling young people to do so much more than just play basketball. He has nurtured talent on the basketball court but, more importantly to him and his organisation, he develops participants as people in order that they progress in all aspects of their lives.

Nigel has helped the young people he coaches with their studies and encouraged them to take part in community work, with a view to boosting their employment prospects in the future.

I see people turn their lives around every day including the students from Birmingham City University that come and work with us, in addition to those taking part as beneficiaries. Some go all the way from not having a job to going through education and gaining employment. For some it may be about developing self esteem and for others it may be about gaining skills but we aim to create opportunities for all and help young people whomever they are or whatever their background realise their true potential.

His close connection with Birmingham City University remains as the club operates from the University’s Doug Ellis Sports Centre at City North Campus in Perry Barr. He utilises students from the University as life mentors, coaches and tutors, working with the disadvantaged young people he engages with.

Students from the University’s Criminology course are also currently working with Nigel on his role with the Home Office, helping him to examine local authority policies around community safety, particularly in relation to gangs, guns and knife crime.

Looking ahead, his ambition is to develop links with Birmingham City University and the basketball club, creating a more expansive, community-focused sports programme for those in Birmingham while developing opportunities for young people from all backgrounds even further. Nigel also wants to link in with other sports and other clubs in order to extend the reach of sport in his community.

On hearing he was selected as one of the Alumni of the Year, Nigel said he felt very proud. “I feel more about getting this award than I did about winning national titles as a player or being in the national squad. It recognises what I have done for others rather than myself; although I never set out to get recognised for any of the work I do, it’s very nice that I have been.

“I couldn’t have done all this without everybody in the club, so the award reflects what we have done together. I have a very good team of people around me.”

Nigel’s drive and energy will ensure that his club keeps on growing and he wants to reach out to as many young people as possible. His commitment enables those in the North Birmingham area to access sport regardless of economic status or social background, giving them the chance to transform their lives.