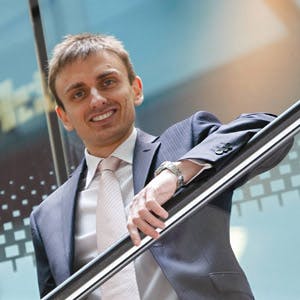 Alumni of the Year 2012: Enterprise and Innovation

With various exciting new developments taking place in the city, Birmingham's skyline has changed significantly over recent years, and Birmingham City University graduate Neil Edginton has played an integral role in that, as part of the team behind such iconic developments as Fort Dunlop, The Mailbox and The Cube.

Having studied Town Planning at what was then the University of Central England, Neil decided his future lay in commercial property.

After securing his first job with surveyors Silk & Frazier (now Faithful+Gould, part of the WS Atkins group of companies), he later returned to the University part-time to undertake a Master's degree in Project Management, supporting his roles on the three city developments.

Following his success on other similar projects, he eventually set up his own company, EDG Property, which is currently involved in its first major project, redeveloping a listed former adult education centre in the Birmingham suburb of Harborne into several premium restaurants, a cookery school and a handful of special apartments.

In addition, Neil is a key fundraiser for Birmingham Children's Hospital, a guest speaker for the West Midlands Centre for Constructing Excellence (WMCCE) and has been recognised in Insider Media's '42 under 42' list, the Property Week 'Hot 50' and 'Who's Who in Britain' twice over - as well as being an occasional guest speaker at the University.

I'd always had an interest in property and the built environment but I thought that a lot of people go into the industry with limited knowledge of spatial planning, and how towns and cities work. I was keen to learn more about that, which I thought would provide a great background to a career in the industry. Because I lived in Solihull and wanted to stay local, UCE was an obvious choice and had an excellent reputation for its School of Built Environment.

"I can genuinely say I really enjoyed my time there - I loved the fact that we weren't just filling our heads with theory; it was balanced with bringing in people from the commercial world to make what we learned more real. I've since come back to the University several times to give those sort of talks myself, because they were so helpful for me. I also gained so many life skills around how to mix with different people and work successfully together, which is what you need when you go into the workplace.

"Having completed my degree, I got a job with Silk & Frazier as an assistant quantity surveyor. I didn't know anything about surveying, so I did a conversion course, and then an opportunity came up with the same company who were setting up a project management department, and I asked to get involved. That's when I came back to BCU to do the Master's, and that really was great because I genuinely did learn a lot - as I was working at the same time I could put the different knowledge I learned into context."

He was quickly approached to move 'client side' and work in house for Birmingham Mailbox Limited in 2000, joining the board of directors in 2003. Neil then went on to lead the business's joint venture with Urban Splash on the Fort Dunlop project, another city landmark which had been empty for more than 20 years and was subsequently redeveloped into offices, retail space and a hotel. In 2004 he was a founder director and shareholder of Birmingham Development Company, the company behind The Cube, adjacent to The Mailbox in the city centre.

Neil went on to set up and subsequently lead the team's in-house construction company in 2007, which at its peak employed in excess of 500 people and turned over £1 million per week, to deliver the £86 million build for The Cube. When The Cube's development was hit by the economic downturn and the company entered administration, Neil was the only member of the board asked by backers Lloyds Banking Group to stay on to complete the project, and the building was finished in 2010, on time and below budget.

I was doing some consultancy work through Silk & Fraizer for the people who'd just bought The Mailbox, and they offered me a job in-house as a project manager, which I grabbed with both hands - I knew it would be a real roller-coaster and a massive learning curve, but it was also a fantastic opportunity to create a genuinely iconic building for Birmingham. I started as the in-house construction project manager but, as part of a small team, your role will often expand and in this case I moved from dealing with development issues to also meetings with tenants, which meant I needed to learn about leasing and the laws relating to landlord tenant relationships. I was dealing with a wide range of partners at a very senior level from the BBC to the individuals at the different restaurants we were bringing in.

"I really grew within the role - I started out as a young project manager and ended up as a developer at The Cube. I played a big part in the development of The Mailbox but I played an even bigger part with The Cube. It was a massive building and a big role, from setting up the company from scratch, to agreeing the funding package with Lloyds and setting up a company to do the construction, because we couldn't find a contractor who was prepared to take it on. Then I was re-agreeing funding when the property market turned where I was working with people at a very high level in Lloyds and, since turning The Cube round, I've done some more work for them helping to rescue distressed developments.

"I think when you're involved with an iconic building like The Mailbox, The Cube or Fort Dunlop, it does give you a greater opportunity to network and build contacts with people - you get exposed to people who you wouldn't normally be exposed to &- for example not everyone has Marco Pierre White's number in their phone! It does put a lot of pressure on you because everyone always asks you what you're going to do next.

Neil's next move was to set up on his own as EDG Property, a development and consultancy firm founded in 2010. He found an ideal first project with the redevelopment of The Clock Tower - a Grade II listed former school and more recently an adult education centre in Harborne, which had fallen into disrepair and been covered in scaffolding for a number of years. Neil plans will see restaurants and a cookery school set around a public square, with its new name - The School Yard - reflecting the site's original use.

"I'm still involved with The Cube at the moment but my development role is winding down and it's now more an asset management role. I was therefore thinking about what to do next and I looked into literally hundreds of opportunities, but so many of them were fairly 'normal', unexciting developments, and I'm not very good at doing things when my heart's not in it.

"When The School Yard came up, there was something special about it - behind the scaffolding, there's a beautiful building and I came up with the concept of combining the restaurants with a cookery school, which was what really sold it to the City Council. The educational aspect drew on the building’s original use as a school, as well as keeping the old playground as a public square, rather than just building on it. Having got planning consent, we're currently working on stripping out the interior, and then in February 2013 it will be the time everyone in Harborne is waiting for, when we start the external building work, with the first phase of the development due to be completed by the end of next year [2013].

"We've already got some of the restaurants on board and what was key to me was that I didn't want to do what a lot of new commercial developments do, which is just move in existing businesses from other parts of Harborne, which wouldn't have actually brought anything new to the area. Instead, we've got people like Prezzo who aren't currently in Birmingham and I worked really hard to get them on board for that reason."

Beyond this, Neil is also involved with a smaller holiday home development in Stratford-upon-Avon, and is currently on the lookout for another ambitious project to further build on the knowledge and expertise he first began to acquire while at the University.

"There are various ideas I'm looking into at the moment, but what I'd really like to do is carry on with these more ambitious projects, making things possible that others say can't be done. We're in a really different world now - a lot of developers are literally not doing anything, so if you do have a good idea and you can get the funding, it is a good time in one sense because the resources and the people are available.

"I genuinely think that the University course gave me a thorough grounding for life in the property world. I refer to the course every day - not the content of the textbooks but more the experiences we enjoyed and how we learned to solve problems and work with people to find solutions - you draw on that all the time without even realising it.

"I was delighted to hear I was one the University's Alumni of the Year - it was totally unexpected and I honestly didn't see it coming at all, but it was fantastic and I'm really proud."