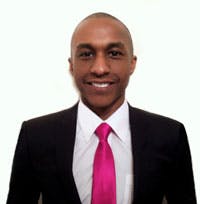 Alumni of the Year 2010: Community Engagement and Leadership

Mark Persard is Deputy Operations Manager for Ingeus, an organisation that helps disabled people back into work, and during his time there he has helped hundreds of the long-term umemployed to find jobs.

He began his career as an apprentice graphic designer at a newspaper but decided that he was destined for a management role. Determined to make a real difference, he went to work for the civil service before moving to Ingeus.

When I joined the civil service I wanted to do something positive for the country. But I realised that I could not have the impact I wanted to have.

He embarked upon a degree in Management in 2000 with his sights set firmly on a leadership role. When he began working for Ingeus more than five years ago, his passion and talent for his work was quickly spotted. He was promoted in record time, becoming the first black male to break into management for the company in the West Midlands.

For Mark, gaining his degree was particularly poignant as he was the first in his family to go to university. To him, accessing higher education was a way of raising the aspirations of others in his community and particularly those of his children.

"I take education very seriously. Growing up, I didn't have any positive black role models and I want to be a great role model for my sons. It is very important for young people to see mum and dad succeeding. That's a massive motivator for me. It is important to not limit yourself in terms of race. I loved university, the degree transformed my life."

Mark is well aware how much his work impacts on the lives of others.

"We are dealing with people's lives. We get to see people growing and growing, it can be quite emotional. I get a buzz when they walk through the door and say they've got a job. It's a pleasure being a part of their journey and we will do whatever we have to do to help people back in to work."

In a two-year period, Mark and his team have helped 550 people into employment. His job is not easy but Mark is driven by his desire to help and knowing just how vital his work is.

The clients need our support. It is a very stretching job. Particularly with the economic downturn, it has been difficult – we are competing with people who have recently been made redundant. But I am very, very motivated and I love the challenge.

Mark's focus on helping others is not limited to his clients. He has also helped colleagues to gain management roles and even helped devise a training programme based on what he learnt at Birmingham City University.

"I am passionate about developing staff. I helped four people into management roles and they now have their own offices. It's very rewarding."

Mark has now embarked on a Masters degree, which he juggles alongside work and his family commitments. In the future, he hopes to continue his successes and aspires to a senior management role.

"I was very humbled and honoured to be nominated for the award. Reflecting on the difference I have made to people is very motivating. I want to help people for the rest of my life and I'm fortunate to work for an organisation that does that."