Alumni of the Year 2011: Community Engagement and Leadership

Born and raised in inner-city Birmingham, Makhdum (Mak) Ali Chishty joined the police force as an 18-year-old and, having built a successful career in a variety of senior roles, he decided to return to education by studying an LLB (Hons) Law degree at Birmingham City University. He then joined the Metropolitan Police as Commander for North London - just before the area hit global headlines during the riots of Summer 2011.

When he joined the police in 1986, it was the culmination of a longstanding ambition, as he felt it was a role he would enjoy, and where he could make a difference. Although at the time there were few police officers from minority ethnic backgrounds, he was not put off and felt that the additional insights he was able to offer to his colleagues helped his career in the early stages. 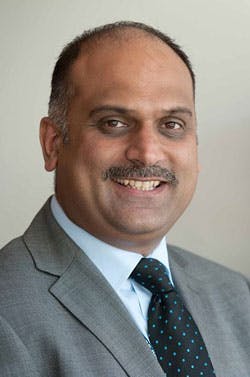 He said: "I had always wanted to join the police for several reasons - I thought it was a very exciting job; it was a job where I knew I could make a difference to people's lives and help them to feel safe; and it was a chance to get involved in an area which, at that time, very few people from an Asian background went into.

"I loved Birmingham but wanted to try working in a different area and, since Warwickshire sent me the forms to join when I was 18 - ready to start at 18-and-a-half - whereas the other forces I contacted said I would have to wait, they got hold of me first!

"I found the reaction when I first joined the force to be very positive - because there were very few BME [black and minority ethnic] officers at the time, they were interested in my background; my language skills were keenly taken up and my ability to relate to individuals from certain backgrounds was a definite benefit."

During his time in Warwickshire, he was quickly promoted to CID where he went on to hold a variety of senior positions, before moving back into uniform as Borough Commander for the Warwickshire town of Rugby, where he took a pioneering approach to community relations, involving the public in the drawing up of policing priorities, helping to build trust and support between the force and the communities it served.

I got an early break because of my skills and my background, as I was able to get involved in a couple of major investigations which gave me the opportunity to show what I could do and, using that experience, I moved into CID as a Detective Constable three years after I joined the force. I then stayed in CID for 16 years, and that was where I earned the majority of my promotions, going from DC, to DS, to DI, and then DCI. I then moved back into a uniform role as Borough Commander for the town of Rugby.

"Rugby was a fantastic place to live and work, with some great people, and I really enjoyed my time there. As Commander, the whole of local policing is your responsibility, and you are a civic leader as much as a police figure. While I was there, I tried to really bring the police and the community together and we developed something called the Rugby Police Manifesto, where we consulted with local communities about what's important to them, and then set our priorities out in this document. It was about giving people some power back, so they were able to meet with us, have their say and ask questions.

"There was also a public scrutiny panel where we met monthly and engaged with local people from the town, giving them the ability to ask people like me what we were doing. It also gave the police a proper chance to tell them what we'd been doing and how we'd been taking action on issues people had raised. This sort of thing is fairly commonplace in police forces now, but it was pioneering at the time."

Despite his achievements, Mak felt that he would benefit from gaining a greater insight into the history and theory behind crime and legal matters, and decided to return to his home city to study a degree in law at Birmingham City University.

"My degree gave me so much knowledge that I have used in my career since. Although I had been involved in fighting crime all my life, knowing more about the history of crime and the theories behind it has really helped me. Also, learning about new areas such as employment law served me well, as I was also Director of Human Resources in Warwickshire at the time.

"The teaching standard was very high - studying and working at the same time required a lot of self-discipline but because the subject matter was so interesting, one thing would lead to another and when I started researching something, I would want to find out more. The opportunity to discuss what I had learned in seminars, and get feedback from people with different backgrounds to me helped me to get an even wider perspective on what I was learning."

After returning to Warwickshire, Mak continued to attract plaudits, being awarded the Queen's Police Medal in Her Majesty's New Year's Honours in 2009 for distinguished police service. He then successfully passed the Police National Assessment Centre in 2010 and attended the Strategic Command Course in 2011. His move to the Met followed shortly afterwards and he took up his challenging post as Commander for North London - where he is responsible for policing Enfield, Barnet, Camden, Islington, Hackney and Haringey - including some areas affected by the subsequent riots.

I decided to apply for a role in the Met because the opportunity to work in such a large and exciting city was fascinating, and having arrived here, it has lived up to my expectations. My first priority on arriving was the same as it has been throughout my time in the police - to protect people so they feel they can walk around safely by bringing down crime - that's my job. Every day, every step I take in this role, I learn something and I draw on all of my past experience when I'm dealing with whatever situations crop up as part of my role. I believe I've been able to bring some fresh perspectives to the Met, and I've also been able to learn from them.

"The riots began in Tottenham, which is part of my area. My main focus was on remembering that, where the riots were taking place, there are a lot of really good people and very strong communities, and the main thing to do was to get back on track and start rebuilding as soon as possible. What happened was a huge challenge for everybody and at times like that, you rely on all of your training and experience to hold it together, and work as hard as possible to make sure people around you are feeling confident and able to do their jobs."

Mak was back at the University in May when he took part in a seminar at the Centre for Applied Criminology on the subject of honour killings, for which he is also the national lead on behalf of the Association of Chief Police Officers, helping to formulate policy on a national level.

"I think over recent years we have done really well in recognising that the problem exists and formulating a very clear response. I would like to see it eradicated as a culture, I think everybody deserves fair and equal human rights, and tackling this practice is a very important priority for the police."

Mak said that he felt very proud to have served the community and helped to make people's lives better and was delighted to have received recognition from his former university.

"I have heard that I'm the most senior Muslim police officer - I haven't checked but I think that may well be the case. I do feel a particular responsibility to that community and I am very privileged to represent them. I feel proud that I have had the opportunity to make changes to help people and I'm driven by making a difference to people's lives.

"I was absolutely shocked and delighted to be named as one of the Alumni of the Year - it came as a really nice surprise, especially since the honour comes from my home city."