Alumni of the Year 2011: Excellence in Sport or the Arts

With a passion for art and engineering, Luke uses his expertise in both fields to design and build large-scale sculptures that celebrate the Midlands' industrial heritage. He is founder and director of Industrial Heritage Stronghold, a not-for-profit organisation which aims to "build Public Artworks which celebrate our industrial heritage in a very real way".

Luke is already well-established in this field, as a main protagonist in the re-building of the Titanic's bow in Belfast, restoring the Titanic Engineers' Memorial in Southampton and bringing the Titanic's anchor home to the Black Country. His largest project while at university was 'Steel Manifesto', a two-tonne steel tablet with an inscription about local industry commissioned for Centenary Square in Birmingham as part of his final degree project, and he worked for Bolton Council on the Fred Dibnah Memorial Monument's concept sculptures. 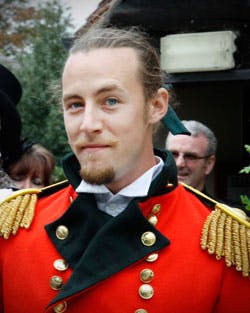 Luke's family runs a chain and rigging manufacturing company which has been in operation for over 100 years, and is one of the last remaining factories that still makes bespoke chains of the size that would have been used on the Titanic. Combining his family history with his own creative expertise, it was a natural choice for Luke to specialise in large-scale public art which reflects Britain's industrial heritage.

"When I was growing up, I was always artistic and really enjoyed the physical process of making things. I found it very satisfying to see objects take shape, and sculpture was the best way for me to blend my love of the artistic and construction side of design.

"My family had been in blacksmithing or large-scale engineering for many years - our family firm was opened in 1910 but our history in that line of work goes back as far as we can trace. I think when you start to grow up, leaving university and thinking about your future, it's quite natural to look at your roots. Even with art, there is a need for engineering, particularly with large-scale public art. I had a lot of support from my family with advice and expertise, and I'm sure I wouldn't have ended up doing what I'm doing if I hadn't had this background."

As part of his degree, Luke also made a number of short documentary films, one of which won the Bronze medal at the London International Short Film Festival. As a result, he worked in the film industry after graduation for a short while but, realising his heart still lay in sculpture, he returned to his native Black Country, where he won his first commissions and set up Industrial Heritage Stronghold.

Four years on, the company has gone from strength to strength and, while Luke will now often be approached to carry out projects, he also still spends time looking out for potential opportunities himself.

I get a lot of requests from people as my company is now getting quite well-known and we have a good reputation for community involvement, but I also spend time looking around at new developments taking place in the region and, if I think there is potential to incorporate some public artwork, I get in touch to see if there is any budget for that and whether they would be interested in seeing my ideas. Normally I have a good deal of freedom, just being given a budget and a site and then being in charge of all aspects of the project, including landscaping and building work as well as the art itself. What people want is something that's appropriate to the area, and what I always do first is speak to local people and find out what they would like to see.

"I do as much of the manufacturing in-house as possible, which helps to keep costs down, but some specialist work is carried out elsewhere. There are over 60 engineers at my family company which we share the factory with who can be brought on board if needed, as well as various freelance artists who I know who I can call on. Because it is interesting work, people usually price it very well as it's something they're keen to do, which means I can then go on to carry out ambitious works at a reasonable cost."

Luke said the most satisfying part of the job was seeing his work become an accepted part of the local community, which local people were proud of and wanted to look after. And he said that, despite the current economic climate, commissions were so far holding up.

"We always hope that what we build will become a well-loved part of the community. One of the best indications of this is that a lot of our work is placed in fairly deprived areas which may have a lot of petty crime, but we have very little problem with theft or vandalism and I like to think that's because I try to involve the local kids in the design so they feel a bit of a sense of ownership. In fact, there was recently some graffiti on a sculpture I'd done by the canal in Dudley and someone has been going back at night to repaint it - I don't know who it is and they're not getting paid, but they've obviously adopted this piece of art to the extent that they feel they want to look after it themselves.

"I'm as worried as anyone by the recession, and you would think that public art would be one of the first areas to suffer from public spending cuts, but we have work going through to 2013 and new stuff is continuing to come in. I think perhaps in these times we're in, people realise it is important to have some sort of symbol of the community and group identity, and public art can help to achieve that."

Luke's career took another turn in 2010 when he co-presented the Channel 4 television series 'Titanic: The Mission', in which he and three other modern-day engineers attempted to rebuild sections of the ill-fated liner, using the tools and techniques of the early twentieth century.

"I heard that there was this project to rebuild part of the Titanic and I got in touch as I knew my family's company could produce the chain cables if they were interested, and from there they just kept getting back in touch with me as they wanted to find out about other industrial processes of the era - I didn't always know everything they wanted, but I usually knew someone who did, and because these people with the knowledge tended to be older people, they weren't the sort of experts you'd find online. Eventually I think they thought that I was the sort of person who could explain these processes in layman's terms and asked me if I was interested in presenting the series. It was a very exciting experience, but I wouldn't do it again - I found the process a bit limiting as I like to get on with making things and in this case I couldn't do anything if the camera wasn't rolling as we needed to capture it all. It also meant I was away from home for a long time and it's a very unhealthy lifestyle, living in hotels all the time, so it's certainly not something I regret doing but it's not what I'd like to do as a career."

The current year has been Industrial Heritage Stronghold's biggest yet, with projects during 2011 including designing, building and installing 37 sculptural installations for the Dudley No2 Canal, being commissioned to design and install the Chainmakers Monument in Cradley Heath and design the landscaping for the surrounding park, and being appointed by Wates Developments as consultant for the Dudley Guest New Village development.

He said: "Looking ahead, I hope to continue with what I'm doing, and grow the company gradually - I have plans to build a factory and I would like to get to a stage where I can employ a few permanent staff. I would also like to gain more projects a bit further afield - I've specialised in the Black Country so far which is a fantastic area to work in, but I'm sure there are a few interesting projects elsewhere.

"It feels very strange to receive any sort of award or accolade - I've had a couple of others before the Alumni of the Year and I'm just so lucky to be able to do what I love as a career, which isn't something everyone gets the chance to do. I'm always learning and there are people I work with who know far more than me, so I really feel very humbled that people have seen fit to recognise my work in this way."