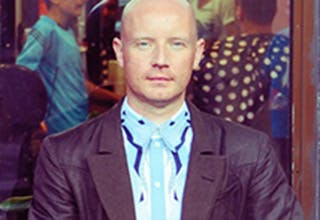 Considered one of the country’s most significant talents in fashion and design, Lee has achieved success as a designer, curator, show director / producer, event manager and mentor.

Lee set up creative events agency Doll while studying for his MA at the University, and the company has gone on to work for clients including Gucci, the BBC, ITV, Land Rover, John Lewis, Sky, Specsavers and Italian Vogue.

He founded On|Off, which stages fashion shows and supports emerging design talent, in 2002. He mentored Girls Aloud star Nicola Roberts for the launch of her new make-up label and appeared on national TV shows including ITV’s Lorraine and Sky’s Britain’s Next Top Model and Make Me a Supermodel. His first collection of fashion accessories debuted at Harvey Nichols in London and are now being sold internationally – they have been worn by Paloma Faith, Jessie J, Fearne Cotton, Jo Whiley and Kate Nash. Lee is also a practising artist, and has undertaken commissions and installations at The Barbican St Giles, Birmingham Museum and Art Gallery, Gloucester Cathedral. He officially documented in textile art the redevelopment of The Bullring.

Lee has been described in Design Week magazine as one of the country’s hottest creative talents, and was included in the top 100 of The Observer/Courvoisier’s Top 500 ‘Generation Next’ individuals. He has lectured at universities in the UK and Turkey and has been an external examiner for print at Central St Martins art school. Lee was also recently Artist in Residence at the London College of Communications.

“I was always interested in art and design, and it was one of my favourite subjects at school. When I finished school I started working in retail management and it was my grandma and my mum who encouraged me to apply to art college. I got an interview at Sutton Coldfield College and, on the strength of the work I showed them they put me straight into the second year of their foundation course. It was there that my interest in textiles really developed, combining that with my existing passion for design, graphics and photography.

After that I applied to BCU, as it was then, initially on a Fashion course but I transferred to the Negotiated Study programme as that allowed me to work more independently and explore different genres. After a year out travelling I returned to study the MA in Textiles, which was quite an intensive 18-month programme, and it was there that I first started working on event production. I art directed our graduate shows for that year and got some very positive feedback at the time – it was commented that I’d taken the event ‘to the next level’. I was then invited back to run the MA Fashion and Textiles course, which I did for a year, during which time I redesigned the content of the course

“At the same time I started getting out there and making myself known to certain figures within the industry. I started off producing fashion shows for designers such as Emma Cook, Robert Cary-Williams and Preen at the time when they were up-and-coming designers or companies. My reputation grew alongside theirs, so I was able to then work with bigger names. I also had a number of pieces of my own artwork commissioned in Birmingham, including a wrap for the Big Peg in the Jewellery Quarter, a piece for the Millennium at Birmingham Museum and Art Gallery and a photographic and textiles record of the construction of the new Bullring.

“Doll took off and my own artwork took a back seat as we worked with bigger clients such as Land Rover, launching the new Evoque, John Lewis and Marks and Spencer. I directed the Clothes Show Live theatre – all good fun projects to work on. I always enjoyed getting involved in all aspects of the shows – doing art direction and production, sorting venues, models and music, whereas in shows nowadays you tend to do only one part. That was one of the reasons why I started On|Off, as I can still get involved in everything and it also allows me to continue working with emerging talent, which is very much my passion.

“I still love to go into the print room and I started to produce my own textile designs for a range of scarves. The first collection was sold exclusively in Harvey Nichols, then it also went into On Pedder in Hong Kong and Singapore, one of the biggest luxury goods outlets in the Far East, so I went from just a few scarves to thousands of pounds of orders – I was reaching a point where there weren’t enough hours in the day, which is why I decided to sell Doll; the company was acquired by Premier Comms last year. Doll was a fantastic journey – I started it from scratch, ran it for over a decade very successfully, employed people and ensured the sale meant my team kept their jobs and that the company was in good hands.

“I’m building my own studio at home where I can work on new designs, so my own textiles and On|Off will be the main focus. I’ve also stayed involved with BCU – I’m very proud to be a Brummie and to come from the Midlands, and I’ve continued to produce the Fashion Shows for Graduate Fashion Week every year and I’m on the panel choosing which graduates get to take part.

“I feel both the Negotiated Study and the MA were very much about experimentation and BCU enabled me to go in different directions so, although I was based in Textiles, I could go and spend time working in, say, the photography department as well. That was motivating, as it taught me to push the boundaries of my work and come up with solutions to problems. At the time, most people tended to graduate as textile designer, or a graphic designer, or a photographer, and I could say I was all of these and more.

“In the future I’d like to continue to produce my own textiles, and sell them of course as that’s a feat in itself – it doesn’t matter how good you think your designs are, you have to find a market for them. I’d also like to widen my work with textiles to design a range of furniture. At the same time, I want to continue supporting young talent – I’ve done a lot in London already to support talent but I’d like to do the same in places like New York and Paris as well – I’ve established my name here as someone who discovers emerging talent but I want to develop that at an international level.

“Hard work pays off and you need to have an offering of something that’s really unique – find what your talent is, make it stand out, make it your own, make it unique and with hard work and determination, you will make it. We’ve got some exciting times ahead in our industry and I think the fact that you can do so much with a combination of hand printed, digital printing and embellishment now means that there will always be a market for beautiful handcrafted pieces – that’s what the high-end buyers really want.

“I was absolutely thrilled and very excited when I opened the letter to find I am one of the Alumni of the Year – it’s about being acknowledged for the hard work that I’ve put in, and the first people I wanted to tell were my grandma, mum and dad to thank them for their encouragement all those years ago.”