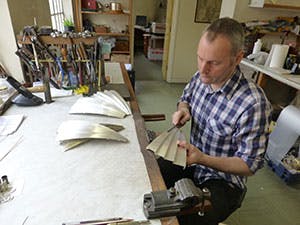 Kevin has excelled in the area of innovative silversmithing, combining traditional metalworking skills with new technology to construct award-winning bespoke silver pieces. His work has been recognised by The Goldsmiths’ Company, among others, and is rapidly becoming a collector's item.

This follows a successful previous career producing hand-made parts for luxury motor vehicles, working for Rolls-Royce, Bentley and Morgan Motor Company over a 25-year period. After feeling he had gone as far as he could in that sector, Kevin made the decision to use his metalworking skills for more artistic purposes, and enrolled on a course at the School of Jewellery; part of Birmingham City University. After graduation, Kevin took up a Residency at the School, sharing his skills and knowledge with other students.

In 2014, Kevin received the Goldsmiths’ Company Award – a prestigious prize recognising work that achieves the highest standards of craftsmanship, design and originality – for the third time, among various other awards. He now sells his bespoke pieces direct to members of the public through his website and via a gallery in New York, where many of his buyers are based, and has ambitions for further international expansion in future.

He said: "I'd been working in a factory for nearly 25 years, most recently at Morgan, which was great – it's a fantastic company – but I reached a point where I felt I'd learned everything I could there. Giving up work, and a regular wage, was a big decision but I loved my time at the School.

"One of the main things I learned was how to design – to sit down with a blank piece of paper and develop an idea. I now read more than sketch, but learning how to develop an idea was very important. I also learned to throw away the bad ideas and push myself to make the best I could. To be able to make what I want, and earn a living from it, is a great position to be in, and I hope to continue to grow and progress in what I do.

"I exhibited at the Goldsmiths' Fair for a number of years, which is a great way of raising your profile and getting international attention, as well as a number of other smaller shows and fairs. I wanted to make one-off objects, rather than mass-produced pieces, which obviously limits where you can sell, but in 2011, I was contacted by an art dealer based in New York. Since then we have worked together on producing larger scale pieces seeking to change the way silver is viewed. I work mainly to commission but always develop new ideas ready for the next project.

"At the moment most of my customers are in the States, either private individuals looking for something for their own home, or interior designers who want something unique for a project they're working on. I get some return business, and on other occasions will be contacted out of the blue by someone who’s heard about what I do. I'm also looking to expand more internationally – I'm looking into some opportunities in Australia and Europe at the moment."

Find out more about courses at the School of Jewellery