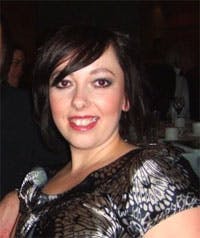 Alumni of the Year 2010: Enterprise and Innovation

Kerry O'Coy is on a mission to promote arts and creative industries in Birmingham. Through her award-winning magazine, Fused, she has become the mouthpiece for creative talent in the region and she is now an influential champion of creative talent.

She set up independent publishing company, Fused, in 2000 with her now husband, David O'Coy.

"When we started, we were aware of all this amazing talent but it was hard to get people outside of the city to be interested in what we were doing.

"People know about the lovely art gallery or the great shopping centre but not about the excellent work that is being produced in the city. We shout about the talent and the musicians who may not have the budget to shout about themselves, they are what give a place its unique identity."

Kerry's passion for arts began at school, but on completing her degree in Media and Communications in 1997, she realised that jobs in the creative industry were not readily available. Determined to resolve this, she set about creating her own opportunities.

"Opportunities in the West Midlands were not really there so I went out there and started it myself."

Kerry's determination is key to her success and despite some difficult times, it has been a labour of love.

"When we started, we had no computer, no telephone and no office space but I am quite tenacious and wanted it to succeed. Sometimes you are at your best when things are at their worst. When times are tough, you dig your heels in. I was driven by a desire to do something that I love."

Kerry's successes include being named in the Birmingham Post's Power 50 list in 2009, while Fused magazine has won the admiration of some of the coolest brands in business, is celebrated for its stylish design, and is now distributed internationally.

She describes Fused as a quality magazine for the youth culture market.

"I think its success is a combination of content and making it look nice, something you would have on your coffee table. It is about unearthing emerging talent and getting hold of it before other people. There's no point in doing what everyone else is doing."

The company also publishes The Area, a popular free events guide. It has also added events to its business portfolio and has represented West Midlands arts as far afield as Austin, Texas.

Despite this, Kerry is modest about her considerable achievements.

"My course definitely helped me. I was not aware of having any entrepreneurial skills and I hadn't decided exactly where I wanted to be, but I came out of university with a broad spectrum of skills. At first, I just wanted to be creative but now I get quite excited when we win new business. I have become the main business head."

She is equally humble about her nomination for Alumni of the Year.

"I was really shocked and delighted to be nominated for the award," says Kerry.