Alumni of the Year 2011: Enterprise and Innovation

Having graduated in Environmental Planning in 1998, Keira O'Mara has since made a name for herself as an inventor and businesswoman after designing a discreet and supportive breastfeeding scarf, which has proved a big hit with mothers around the country.

After initially working for a social research consultancy, and then in a number of sales and marketing roles, redundancy and motherhood prompted a major change in Keira's life.

She had the idea for the scarf after experiencing difficulties when feeding her baby in public in a coffee shop. As well as feeling uncomfortable as a result of the disapproving stares from people at the next table, she was also struggling with a lack of support for the baby, while the scarf she was attempting to use to cover up kept slipping off. 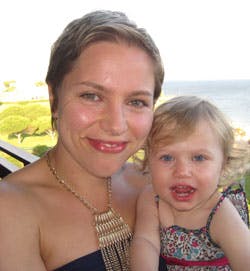 The result was the Mamascarf - a hammock-type device which goes around the mother's neck to shield and support the baby at the same time.

Once Keira came up with the idea, the next stage was to work on the design, raise the product's profile and get it on sale - all of which she did herself.

"I got in touch with somebody who'd done something similar, who helped me realise that it was possible to get an idea to market. She was a friend of mine, but I've also had many people contact me since I started my business, requesting advice on taking their own ideas forward and I'm happy to help where I can, so it's always worth asking. I also made the decision to invest my redundancy money into the idea, which covered my initial start-up costs.

"Once I had worked on the design some more, I registered the intellectual property and the name, before testing the product on mothers and babies, which was a very important step as I needed to ensure that it would work as well for other users as it had for me. After receiving good feedback, I got an initial run of 50 made, which I sold through my website, and it went from there."

Less than three years later, the scarf had attracted enough attention to go on sale in Tesco, Boots and Kiddicare, and it is about to go into Mothercare and Amazon. Also in the pipeline are plans to start exporting the product through specialist distributors, while Keira is now busy developing more innovative new baby products through her company Mama Designs Ltd. At the moment, the business is still a solo project but she hopes to be able to expand and create jobs in the future.

She said: "To get the product into the shops, I generally had to approach them either at trade shows or by pitching directly. I made sure I did a lot of PR from the start, so that my product was well-known and consumers would already know about it, and hopefully request it. The internet has made this process easier, as firstly it allowed me to sell the product directly and also because retailers can ease the product in slowly, selling it on their websites first and then promoting it to the shops if there is the demand.

Entering awards is another great way to promote yourself, particularly with a baby product as it gives you credibility with parents when there are so many products out there, and it's also great PR.

Keira has also become a familiar face in the media, commenting on business and family matters for outlets including ITV News, GMTV, Sky News, The Independent, The Guardian, and the Mail on Sunday, as well as several baby magazines. Her website features feedback from satisfied customers including model Leah Wood and pop star Melanie C and she was part of a campaign for 3 Mobile with Denise Van Outen to promote the benefits of smartphones to busy mums.

She added: "As well as promoting the product, I made sure I was putting myself out there as a potential contact for the media, and with issues such as breastfeeding I was well-placed to comment as I had invented the product with my first child but was then using it myself for my second. As time went on, I became better-known as a commentator so people in the media are now more likely to approach me. I really took to being on TV - I never felt intimidated and I love doing it."

Keira is delighted at the success of her business and says she hopes to continue doing it for a long time to come, as working for herself allows her to successfully combine parenthood and business.

"This wasn't something that I planned at all but it came along at a time when I was looking for a more flexible job so I could spend more time with my family and it's all worked out well for me," she said.

"I was really pleased to be nominated for Alumni of the Year, and it was great to be recognised by my old university in this way."