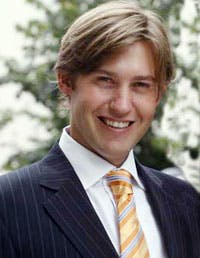 Alumni of the Year 2010: Community Engagement and Leadership

Justo works as a photojournalist and volunteer in some of the most remote parts of the world. He is dedicated to bringing the world's attention to human rights atrocities and to date, has been published by the likes of CNN, the BBC and the New York Times.

Justo's passion for human rights stems from his childhood while travelling with his parents to some of the poorest nations in the world.

"Everything changed, my whole way of life and my priorities. My grandfather and parents were diplomats. They educated me to know that it's not the title that makes you important, you make the title important and you have to act in a certain way. I was taught that we are equal."

Determined to make a difference, Justo began a career in journalism in 1998 before moving to Kenya in 2000, where he studied International Relations at the United States International University.

I wanted to make something of my story. If you don't share what you've lived, it's meaningless. That's why I went into journalism, I was able to reach more people.

In 2006, wanting to gain a deeper understanding of humanitarian issues, Justo came to Birmingham City University to study for a Masters degree in International Human Rights. As part of the course, he wrote a dissertation on the repatriation of unaccompanied refugees from their country of asylum, Guinea, to their country of origin, Liberia; he was keen to explore how the "best interest of the child" was sustained by the international organisations working in the area.

"It is very important to know the theory of human rights and how people perceive it. The people in Africa have to feed their stomachs before they feed the mind. They are more worried about access to health and the right to food. Once you understand that, you can begin to tackle it."

Justo has worked with the UN, where he played a key role in the resettlement of thousands of refugees.

"I worked for UNHCR in a resettlement programme in Dadaab Refugee Camp dealing with refugees from Somalia. I was in charge of the intake of refugees who had no choice but to leave their country. I helped around 12,000 people to have a better life."

He has also helped film a documentary on female genital mutilation, excerpts of which were shown on CNN.

"We are changing the way people see female genital mutilation but the change has to come from within the community. It's very important for girls to understand and we do that through education."

Justo's good works include building a nursery school in Kenya and working as a volunteer, bringing much needed income from tourism to remote parts of Africa.

I organise volunteer experiences in Kenya visiting tribes such as the Maasai and the Pokot, minority tribes which are in very isolated places in remote areas. I don't want to make it very commercial but I do want them to be proud of their community and of what they have. Even though they are poor, their culture is very rich. You get touched by the pains of these people.

For now, Justo is dedicated to influencing policy through his pictures but in the future, he could very well be the one implementing the policies.

"At the moment, I like to be at the grass roots, taking photos. That's the way I pursue the policy makers. Maybe in ten years, with my experience from the field level, I will become more involved in changing policy itself. This award has given me the strength to keep on working for the most needy and the 'forgotten' in society."