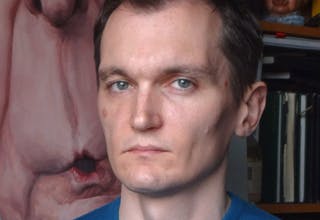 Jonathan is a well-respected illustrator and caricaturist, having had his work published by the likes of The Times, The Independent on Sunday, The Spectator and The New Statesman. He’s also done designs for the Christmas edition of the Radio Times, and has been commissioned by companies and organisations including Unilever, Cadbury, Netflix and English Heritage.

A number of celebrities have purchased Jonathan’s caricatures of themselves including the late DJ John Peel, composer Andrew Lloyd Webber, chefs Raymond Blanc and Heston Blumenthal, and Queen legend Brian May.

Having already won the British Cartoonists’ Association ‘Young Cartoonist of the Year’ award in 1995, Jonathan decided to further his career by studying Illustration at Birmingham City University. Having won a number of student awards, and designed the University’s Christmas card during his time here, he graduated with First Class Honours in 1999, alongside his twin brother Alisdair, who specialised in photography.

“I was interested in caricatures since the age of 11 or 12. I was always drawing and painting. The TV programme Spitting Image became a huge influence and I was given time off school for visits to their workshop. I'd spend a day drawing and getting advice. I feel very lucky indeed to have done that.

“In 1993, the University ran a Cartoon Imagery pathway at MA and held an International Cartoon Conference in the Adrian Boult Hall to launch the course. I was 14 and given a day off school to attend. Various cartoonists, including Mel Calman, Roger Law, Bill Tidy and Ralph Steadman, spoke about their work. I had no interest in A Levels as it meant studying other things besides art. The Vis Comm National Diploma saved me from all that and threw me straight into art education. I enjoyed those two years and then applied internally for the BA. The Cartoon Imagery MA had ended long before all this as sponsorship had ran out.

I feel lucky to have studied just as Andrew Kulman arrived as head of Illustration. The life classes were also important to me, with Lois Wallace at Gosta Green and Paul Powis in Bournville. My Art History is always better than I think, for which I'm grateful.

“I was introduced to computers, which I'd never used before. Illustration isn't really a resource-heavy discipline but if I wanted to try animation, etching or to lacerate my palm lino cutting, I was able to. I had my own drawing board and weekly life drawing classes. I loved the libraries and probably used them most. I once borrowed a book on livestock painting that hadn't been out for 18 years!

“After graduating, I sent out samples of my work to various magazines and newspapers and took my portfolio around London. My first job was for Saga Magazine, then the Radio Times, who I still work for. I'd won an award from the Association of Illustrators as I graduated and that helped me pick up quite a bit of work for that first year or two.

“I still promote myself to keep people aware of what I do, though clients also find my work online or my website. There's a range to my work and different aspects appeal to different clients. It's painterly, which means I can do pastiches, for example. My likenesses have always got noticed. As I'm a caricaturist at heart and there's a strength of character in my figures. I've designed characters for animation, wine labels, business logos, advertising, and a Hollywood film.

“When it comes to tackling a job or brief, everything starts with drawing. I draw a lot in sketchbooks and try to have drawings of various people ready for any topical jobs, as deadlines can be very short. With a new job, I'll draw a likeness and a sketch of the idea. Once that's approved I make a canvas panel and set to work painting. That's where the real work is done. Ideas can come almost instantly, but what's needed depends on how the client wants to work. It's more common now to be asked to paint an idea they've come up with.

“Learning that I was an Alumni of the Year was a nice surprise, as it’s always good to be remembered. I've been asked back half a dozen times by the illustration department, giving lectures about my work, professional practice, character design, and for portfolio reviews. I really enjoy speaking to students and seeing their work.“