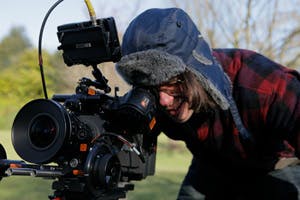 Alumni of the Year 2012: Excellence in Sport or the Arts

Jon Riche turned his hobby of making films into a successful career after completing his studies at the University. He has directed music videos for various artists including Kasabian, Just Jack, Moby and The Feeling, as well as commercials for well-known brands including Nissan, Ikea and Nike.

He has also worked with friend Spencer Jones to form the comedy collective 'Broken Biscuits'. He has co-written a number of award-winning comedy shorts with Spencer and they have gone on to write and direct a BAFTA-nominated television show called 'Big Babies' for children's TV channel CBBC.

He first came to Birmingham City University to pursue his interest in drawing cartoons, but once he arrived he found that there was a far wider range of creative opportunities open to him.

I liked the University and the lecturers when I came to visit, but I think what swung my decision to study there was you could try out various disciplines in the first year. At the time I wanted to study illustration because I'd always loved doing cartoons, doodling in my maths lessons at school, but I also liked the idea of animation, so I wanted to give that a go. I spent my first year playing around with different techniques and by the end of it I'd figured out that if I became a director I would have far more freedom and could work with animation, puppets or actors. So I decided I wanted to become a director - I had no idea how to do that, but spent the next two years experimenting and making as many different videos as I could. It was a great time to be doing this, as for the first time you could upload a lot of information to computer, which made the whole process much quicker and easier.

"The course taught me that, in a group of 20 people, most of them will have the same idea and you'll only get a few who do something genuinely different. It taught me to think like that, which is a very useful skill to have as a director, particularly in the areas I work in such as commercials and music videos where you'll be pitching against other directors. Particularly when you're starting out, if you suggest the same thing as everyone else, they won't pick you - they'll go for the experienced director they already know, but if you come up with something really leftfield, that will at least make them sit up and take note, and then you've got a chance."

"After leaving university, I must have contacted about 200 production companies; I went down to London and slept on a mate's floor, and hoped someone would give me a job. Fortunately, I got a chance as a runner, just making the tea really, but it got me a toehold in the industry and I still kept on making films and thinking up ideas all the time. I then entered a competition to make a music video for £200, and I managed it for £175 which must have impressed them because I won! That got me a job with a production company and things moved forward from there."

After moving up to more senior roles with different agencies and media firms, Jon got the chance to put his filmmaking skills into action, with music videos, and then adverts providing a good starting point for his future ambitions. He said the briefs for such projects often gave him a lot of freedom to come up with original and creative ideas.

"Commissioners will send tracks to directors and sometimes indicate that there are certain elements they want to include or just leave it up to you. To be honest, if I have a good idea, I'll usually pitch it even if it doesn't fit their brief and if they like it the're just as likely to go for it anyway - it's coming up with an original, interesting idea that's most important. It's also possible to do it the other way round and approach a band with an offer of making a video for them - there's unlikely to be any money in that but it can be a good way of building experience in the early years.

"The industry tends to go through phases and, when I was starting out, there were some great opportunities because you had a lot of the big-name DJs who didn't want to be the focus of their videos, so you could put forward something quite experimental. Now, people tend to play it a little bit safer and there's usually less budget so while I still enjoy it, there perhaps aren't the same opportunities for new directors and I'd say to people starting out they may be better off making their own short films rather than a music video where they're going to be quite restricted creatively.

"With commercials, again we will be given a brief and invited to put forward ideas, and you just need to give as much information as possible about how your commercial will work, describing the scenes and how all the characters look - I'll often draw it rather than write it all out as that's the best way to make it clear."

Despite his success in those fields, Jon was keen to branch out in other directions and teamed up with his friend Spencer to work on a range of comedy-related films. This culminated in the 'Big Babies' programme in 2010, which features two 'babies' - actually real babies with adult heads superimposed on their bodies - who go on various unpredictable adventures. Jon originally thought of the idea as a concept for a music video, but after he was unable to convince a band to use it, he turned it into a TV comedy sketch, again with Spencer on board, which was subsequently picked up by the BBC for a pilot and a thirteen-episode series.

"After getting a bit of success with music videos and commercials, it would have been easy to cruise along doing that, but I reminded myself why I wanted to be a director in the first place and began thinking about what to do next. When I lost my job with a production company, I was in between jobs and wanted to make a film - I rang up Spencer, who was a mate of mine and invited him to act in it, which he'd never done before but it ended up getting into a couple of industry magazines and on a promotional DVD, and we ended up making a few more together.

"From there, we went on to get involved in live comedy, directing comedians on stage, then we started filming some of those. We then got a look-in at the BBC when Sharon Horgan saw some of our stuff. We went for a meeting and showed them loads of our work and they seemed to like a few things, particularly the Big Babies idea which was at that point a 70-second video mostly making fun of BBC children's programmes. Someone from the children's department watched it and we weren't quite sure what she'd make of it - but it went down well and we ended up getting the commission. Someone else there saw it, who'd worked on Beavis and Butt-Head for MTV, and he said we'd created Beavis and Butt-Head for children!

"At that point, they wanted to get writers in, but every piece of advice I'd ever heard for directors was to keep as much control as possible, so we said we'd write it ourselves. We had no writing experience and we had a very tight timescale of two scripts and two re-writes a week, but we locked ourselves away and wrote and wrote and wrote and in the end, they liked what we did. It was 13 episodes, and was a completely new experience for us - very hard work, every single day for about nine months, and the whole job took over a year but it was well-received and we were nominated for a BAFTA, which was fantastic."

Jon now has plenty of other projects in the pipeline, with talk of remaking an adult version of Big Babies for US TV, a new series for BBC3 and a film project for a computer games company. Ultimately, Jon says he would love to make a full-length film and says he has a few ideas in mind.

There are many things I'd like to do, but like most directors my ultimate aim is a feature film. It's very hard to break into that sector and it's a five-year lead time but it's possible - everything's possible. You just have to look at where I started and where I am now to see what you can do if you believe in yourself and go for it. I've had my ups and downs, I've lost jobs, been through recessions, had good years and bad years, but I'm still here and still doing what I love.