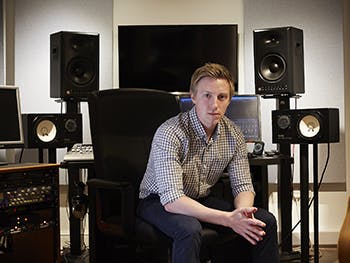 Harry Lightfoot is a music composer for film and television. After graduating from Birmingham Conservatoire, Harry started as a session saxophonist before writing and producing music for labels including EMI, Sony, BMG and Warner Chappell. He’s composed music for TV shows and adverts, for companies including McDonald’s, Jeep, Samsung, Pepsi and many more.

“The course at BCU was exceptionally good – the tutors, as working musicians, had a lot of practical knowledge and the Conservatoire has great links with venues like Symphony Hall.

“After graduating, I was a session musician with two X-Factor winners, but soon realised touring wasn’t for me. I did some TV theme tune and advert work from a basic studio at home.

“Just for fun, I put together ideas for film trailers. I found out that it was a separate industry, nothing to do with the music in the films themselves. It was tough but I was fortunate to connect with the right people who liked my ideas. It’s strange as none of the public know you exist, but I get a buzz from knowing my music is out there.

“Trailers are required at short notice – sometimes 24 hours – and I’ll use samples in my studio to create an orchestral sound. The first time I worked with a real orchestra was with the London Symphony Orchestra at Abbey Road studios, which was phenomenal.

“The grounding I got at BCU – jazz improvising is essentially composing - has given me the discipline to get the sound I want. I was absolutely thrilled to hear I am an Alumni of the Year – I’ve researched former winners, and I’m in pretty remarkable company, so it’s a great honour.”