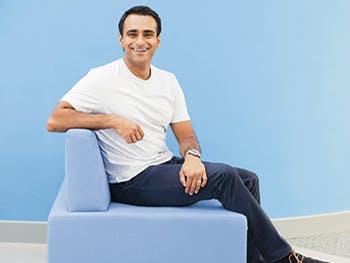 Harry is the CEO and Co-Founder of Wambiz, a provider of industry-specific apps which create private social networks for schools and colleges, allowing them to communicate more easily with students.

After graduating in 2009, Harry worked for the investment bank Morgan Stanley, where he had undertook a placement during his time as a student, before he founded Wambiz in October 2012. Harry’s role as Chief Executive Officer is to drive technology strategy and idea generation, as well as working with the company’s Chief Operating Officer to formulate sales and marketing strategy.

Wambiz initially specialised in networks for schools, colleges and universities which allow students to connect and communicate with their teachers and each other in an engaging, yet controlled way, without blurring the line between school and social life. Last year, the company signed a seven-figure deal with education software group Tribal plc, who acquired from Wambiz the Intellectual Property Rights and exclusive distribution rights for the Wambiz private social network solution to the education markets across the UK, Australia and New Zealand. Tribal also acquired the non-exclusive rights to sell the solution into Canada. This is freeing up the Wambiz team to target the American education market and look for other sectors which could use the same technology in the UK.

Harry also played field hockey for England for many years. He has won three English Premier Division titles among other accolades, and still plays for his local side.

“When I was at school, I was always interested in computers and found tech really cool – from there I took A Level IT and then applied for the course at BCU because I liked the combination of business and technology knowledge it gave me. I was interested in the tech side but I didn’t want to become a programmer for example – this course gave a great balance between the two and, from a career perspective, kept my options open. I felt there would be a lot of opportunities in future for business leaders with an understanding of technology, and that has proved to be the case.

“For me, all the staff on my course were brilliant, and I particularly remember Thomas Lancaster who was really important to where I am now. A lot of what he taught was programming, which I expected to enjoy least, but he was really engaging and increased my interest in the subject. I always received a lot of support and when I was playing hockey for England, the University was always accommodating when I was away and missed lectures.

“Lots of people do a degree and then go off on a tangent, but for me, my degree has directly set me up for everything I’ve done since. I had a placement year with IBM as part of my course, and then spent a three-month summer placement with Morgan Stanley, both of whom I made contact with at employment events at the University. After I graduated, I went to work for Morgan Stanley on their graduate programme, which meant that I went into my final year having already secured a role.

“At Morgan Stanley, I went on the graduate training programme in New York, after which they place you in the role they think you are most suited for. I ended up in an application support engineer position, working with traders on the electronic trading platforms, which again was that mix between IT and business, whereas most of the people on the programme were from a Computer Science background, so I had an advantage. I then moved to more of a business-related role, but still with a tech element, before I left to start my own business.

“Going through my degree, and learning how businesses raise finance and grow, I’d always wanted to start my own company. If you start a business with no money behind it, the chances of success are much lower so I knew I needed to come up with the right idea that would attract investors – initially I raised £150,000, and since then we’ve had several further funding rounds.

“I knew that there was a real need to improve communication in schools, colleges and universities, as teachers were using email to communicate with students, which young people do not engage with, or channels such as Facebook which brings about safeguarding concerns. Our apps look and feel like social media but there are lots of controls in place, for example you have to belong to the institution concerned to use it and posts can be removed or people can be blocked from the app if needs be.

“We built a web-based version of the app initially which we trialled at South Staffordshire College, who helped us to understand what was needed and what we needed to change by giving feedback and arranging focus groups. We then launched it at the Association of Colleges Conference, and got a number of customers off the back of that, this allowed us to start building customer support and sales functions within the business, which helped to bring in more customers, and we grew from there.

“In 2017, we made the decision to sell the Intellectual Property Rights and exclusive distribution rights for the Wambiz private social network solution to the education markets across the UK, Australia and New Zealand to Tribal. They also acquired the non-exclusive rights to sell the solution into Canada. This allowed us to use the funds we raised to expand into the USA, and also look for new markets outside education in the UK.

“I was really surprised and happy to find out I was an Alumni of the Year. It’s good to receive recognition, but it’s also really nice because everything I’m doing now links back to my time at the University, so it’s good to have that connection and I hope it’s a relationship that will continue in future. I hope that my success will inspire current students at BCU and BCU Alumni to pursue their goals and ambitions.”