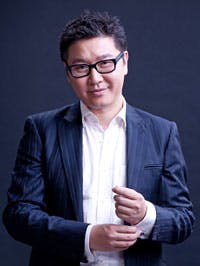 Alumni of the Year 2010: Enterprise and Innovation

Since achieving his degree in Jewellery and Silversmithing in 2001, Fei Liu has won countless awards for his innovative, contemporary designs that have captured the imagination of the design world. He once designed a plaque for David Beckham and his jewellery has been spotted on the red carpet, in glossy magazines and adorning some very high-profile necks.

"I was invited to the Golden Globes because the president of NBC was wearing my design on the red carpet. I am most proud of the little things. I was listed in the Hot 100 in the Professional Jeweller magazine - there were only two of us from an ethnic minority. I have been listed as number five in a list of trend setters. I was thrilled to be listed. When you have won so many awards you get over it, you are just doing what you want to do and what you love."

He opened his first jewellery store, based in Birmingham, five years after graduating. He has gone on to break the market in the US and recently opened outlets in Tokyo and Beijing.

Fei has faced a number of challenges on road to success, not least of all when he first arrived Birmingham from China.

"I was the first Chinese student in the School of Jewellery. When I first came here, it was a huge challenge for my teacher to try and guess what I was trying to say. I felt lonely in a way, but it made me improve my English. I come from a very reserved culture and I was fascinated by how open British culture is. I wanted to keep the real me but adapt to this new society and improve myself too."

His artistic journey was even more demanding.

"Since I have been in the UK, my whole understanding of art and beauty had been turned upside down. European art history has become the most important influence in my understanding of art. Jewellery is not just pretty or expensive or wearable. It is a limited space to demonstrate creativity, it's another contribution to human society. It is more than just a rock or metal, it's the art of development."

For Fei, designing jewellery is an extension of his own character.

"Jewellery gives me the opportunity to express myself and how I see the world. It's a link to between the outside world and the 'inner me' and how I want other people to see me."

Fei has bridged the gap between east and west masterfully. He is now one of the major players in Birmingham's jewellery industry and is currently working to promote Birmingham's trade both in the UK and internationally.

"I want to tell the world how wonderful Birmingham is. It's an important city for the nation but it has been neglected. I am very proud to call myself a semi-Brummie. I would like to be recognised as a British designer. I am proud of where I come from and Britain's creative industry. Britain has driven the meaning of contemporary jewellery and I want to keep this going."

He sees winning Alumni of the Year as inducement to carry on creating his masterpieces and to help others achieve the same success.

"I have changed and I want to create the same opportunity for other people. I have always been extremely proud of the Jewellery School. I am extremely honoured to win Alumni of the Year. All my hard work has been recognised."