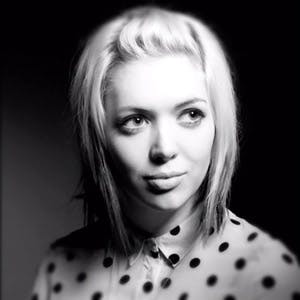 Alumni of the Year 2012: Enterprise and Innovation

Emma Shipley is an exceptionally talented and creative textile designer and illustrator who has already achieved great things in the four years since she graduated from Birmingham City University. She is making a significant contribution to British design innovation and is seen as a rising star.

Emma has won a number of awards for her work, which has been described as "astonishingly skilful and distinctive", and has received international acclaim. Her exquisite drawings feature wild animals and botanical plants in intricate, imaginative designs.

Emma's creations are inspired by nature with natural, mathematic and scientific influences, and her designs are derived from her original pencil drawings, which fuse highly-skilled draftsmanship with a subversive imagination. She draws on a long heritage of English design, from William Morris and the arts and crafts movement, through to Darwin's scientific studies.

She said: "Nature is such a rich source of inspiration. An interest on the theory of evolution has also always been there. Our link to all other living things inspires so much wonder and awe."

She has drawn inspiration from places as diverse as Birmingham’s Botanical Gardens through to her travels to the Amazon jungle and a safari in Africa. Emma takes photographs, rather than working from life, and uses a lot of different sources to develop her imaginative creations.

After graduating with First Class Honours in Textile design from Birmingham City University, she went on to complete her MA at the Royal College of Art, while working part-time for Anne Tyrrell MBE, a Member of the British Fashion Council) Design Agency, on high-profile clients.

Emma won the Texprint Pattern Prize 2011, awarded in Paris by Agnès B, and represented the best of British Design in Shanghai, Hong Kong, Como and Paris. After exhibiting in Paris, Berlin, Hong Kong and Shanghai, Emma launched her own label - Emma J Shipley - at London Fashion Week in February 2012.

She has opened her own studio and launched her innovative range of scarves in legendary fashion store Browns; it is now stocked in Harvey Nichols, Fenwick and Fortnum & Mason in London. Her aim is to blur the boundaries between fine art and design, with the scarves and wallpaper acting as a canvas for her drawings.

The beautiful range of luxury scarves are wearable artworks, designed to be treasured. They are created in London and printed in Italy onto fine silks, modal and cashmere. The designs are digitally printed directly onto the fabric using the latest technology, as this gives the best results with all the fine detail in her work, as well as being more environmentally friendly than traditional printing methods. Her collection is soon to launch internationally, in Paris, Hong Kong, Tokyo, the USA, Russia and the Middle East.

Her wallpaper collaboration with unique fashion and homeware store Anthropologie had just launched in the US and UK and includes designs based on the theme of time travel.

Emma has also been working as a print, material and colour consultant for Jaguar Land Rover, working on innovative design projects.

It's important that you remain true to your own creativity. When you are a student you may worry about future employment and being commercial but you should focus on your own style. I wouldn't have imagined collaborating with Jaguar Land Rover but they saw something in my designs which resonated with them; you never know what opportunities may come your way.

In July 2012 Emma was awarded the Premiere Classe Paris New Accessory Designer Award. She will show for the third time at London Fashion Week in February, and has learnt from her experiences first time around when she was thrown straight in at the deep end straight after graduating.

"People were really surprised when I exhibited at London Fashion Week so soon after graduating. It was great to get that kind of exposure and see what the marketplace is really like. You go from comparing your work with student peers to launching on an international stage.

"It wasn't just about putting a collection together; it was learning about the sales process, how buyers work and publicity. It was a steep learning curve but very exciting."

Emma has been selected for Vauxhall Fashion Scout, showing in London and Paris and is currently negotiating several exciting new interior collaborations which will materialise in the next few months. She has also worked in innovation for the American VF Corporation, a leader in branded lifestyle apparel including jeanswear, outdoor products, image apparel, sportswear and contemporary apparel brands. Emma completed an installation for their Innovation Summit, future-led work looking at repetitive patterns.

A true ambassador for Birmingham City University, she made the most of her time as a student, winning both the Eric Mead award for Excellent Studentship and the Burberry Design live project, with subsequent work placement opportunity.

She designed the winning Birmingham City University Christmas card in 2007 and seamlessly undertook every external opportunity that arose. She also accompanied staff as a student representative on two recruiting trips to the Far East, which she says was a brilliant experience.

Emma stays in touch with her tutors, who have described her as a joy to teach, and said she was surprised and pleased to discover she had been put forward for the award. "I didn't expect it at all," she said.

In the future, Emma will continue to develop her brand and her passion for drawing is unending. A collection with leading fabric and wallpaper designers Osborne and Little is set to be launched in January 2013, featuring more of her trademark botanical style designs, with leaves, animals and half-imagined birds.