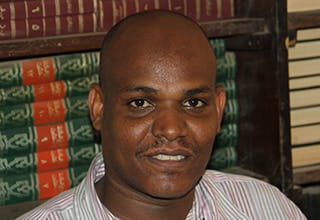 Elshareef is a lawyer and human rights practitioner who has attracted widespread acclaim for his work to protect human rights in his native Sudan.

He spent a year working at the People's Legal Aid Center in the capital Khartoum, where he represented, advised and defended in court various victims of human rights violation including women, children and political prisoners. He then moved to head up the organisation's field office in the town of Zalingei, in the troubled state of Darfur.

2013 ...was the year Elshareef graduated

In 2008, Elshareef started working as a Human Rights Officer for the United Nations Mission in Sudan, monitoring and reporting on human rights developments, and working closely with government authorities and other agencies working to promote human rights and rule of law.

He hit the headlines when he was part of the five-man defence team representing Meriam Ibrahim, a Sudanese woman who was sentenced to death because of her Christian faith in May 2014. Following extensive negotiations and an international outcry, she was allowed to leave the country for Italy, from where she went on to join her husband in the USA.

Elshareef has remained involved with Birmingham City University, returning to participate in a City Talks public lecture on the Meriam Ibrahim case, and supporting a major joint programme between the School of Law and the Sudanese Human Rights Initiative to promote freedom of religion in the country, which will involve training lawyers and the judiciary, as well as facilitating cultural change.

"I grew up in Sudan during a dictatorship and was always thinking about justice – I saw many people who were arrested, tortured or killed and wanted to be able to do something about that. I decided to become a lawyer, and continued to develop my knowledge during my studies.

Birmingham City University is one of the best universities for studying human rights, and that was the area I wanted to focus on and develop my skills. It has a great perspective on human rights and studying this course helped me a lot to understand these issues, giving me a greater perspective on global human rights issues, in addition to what I already knew about the situation in Sudan.

"As part of the course, I got to undertake an internship at the human rights organisation Redress in London, and then I did some work for Amnesty International. Both helped me learn more about such things as how to run a human rights campaign and how to raise human rights issues. All these opportunities came about as a result of attending Birmingham City University – it opened my eyes to a wider range of human rights issues and put me in a good position for my future career.

"I was very surprised by the response to Meriam Ibrahim because the case had been ongoing for quite a while before it started to attract attention, but when we started to get more interest in the USA, the UK and Europe, that helped to put pressure on the Sudanese government. It also helped Meriam to stay strong because she knew people around the world were supporting her.

"Since then, I have continued to work with NGOs in Sudan, focusing on representing and defending clients, researching and preparing defence reports for various types of cases but focusing on cases of human rights violations, and facilitating training for organisations including the police, court officials and NGO staff.

"The community needs a lot of help and support and my own aim is to see Sudan's legal system brought in line with international human rights standards. It is very hard for us, because many lawyers are blacklisted by the government, but I will not give up and will continue to raise these issues, and bring about change in the proper way.

"I am very pleased and grateful to accept the award, which is an excellent recognition that will encourage me to continue enhance human rights in Sudan. I am also very appreciative of those who recommended me and to the University for the time and effort it has put into the awards process."