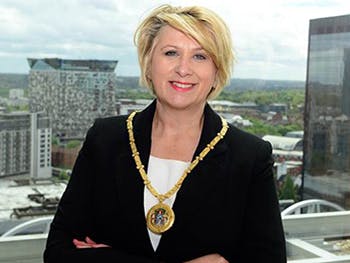 Eileen Schofield is Principal of Schofield & Associates – a specialist employment law practice which she set up in 2009 with the specific aim of providing strategic and pragmatic advice to employers and to individuals.

She graduated from Birmingham City University in 1996 and worked in a number of legal roles, most notably with the solicitors Irwin Mitchell before starting her own company.

Eileen has represented both employers and employees on issues of unfair dismissal, redundancy and restructuring, discrimination, whistle-blowing and data protection. Schofield & Associates advises UK clients from a range of sectors and has also developed specific expertise in advising international clients who are launching new ventures in the UK. One case saw her being responsible for setting up the first transatlantic video link to enable witnesses to present evidence to tribunal from America.

Eileen has been Chair of the Board of Directors at Birmingham Law Society since April 2016, having previously served as President of the organisation. She is also a Governor of the Edge Academy, an alternative provision school based in Birmingham. Eileen is a Non-Exec Director and President of the US office of a company which works closely with the film industry and BBC.

“I came to Birmingham City University as a mature student just after I’d had my first child and 18 months later I had my second, so I was combining studying with looking after two young children! It was a lifetime’s ambition to qualify as a solicitor but I had been distracted by the lure of going into work, and I ended up working for the Crown Prosecution Service and managing an established recruitment business, which was all good life experience to bring with me when I returned to study. I was very proud to get a place at what was then Birmingham Polytechnic – I slipped into the library before I started the course to have a look around and was hugely inspired by the prospect that I would be learning so much and following in footsteps of greatness into the legal profession.

“I was fortunate enough to have some really inspiring teachers while I was there; our lecturers encouraged us to be innovative, creative and prepared. The learning was very much about a thorough understanding of the black letter law and how that translated into solving complex legal problems. We were encouraged to be innovative and creative with our problem solving and most of all the message that was be prepared. These lessons have stayed with me and have given me the confidence to make a difference in my career.

“After graduating, it took some time to get a training contract, so I worked in the Environmental Health department of Solihull Council, and then at Irwin Mitchell as a paralegal. Looking back, both of those roles gave me valuable experience and a solid introduction to the complexities of a range of real life problems and the impact of those situations on everyday life. At the council I was involved in resolving social issues such as noise and waste pollution and at Irwin Michell I worked on complex group actions in the travel litigation team, where we won the accolade of Client Care Team of the Year. I was fortunate in obtaining a training contract with Irwin Michell prior to which we decided to take our young family on an an adventure and took an ‘adult gap year’ to live and work in Melbourne, Australia.

“My first position as a trainee was in the employment law team. I won the Birmingham Law Society’s ‘Trainee of the Year’ award in 2001, and qualified as a solicitor the following year. In 2004, I became an Associate and in 2009 I made the decision to set up my own firm.

“I felt I was an entrepreneur by nature and I really wanted to have the opportunity to put the skills I had developed to the test and have more control over the work I did. By then I had a good reputation around the city as a professional who didn’t shy away from a challenge and who was was robust in getting the best outcome for clients – whether they were an employer or employee – which was a good start. I developed the business organically over the next eight years.

“Since then, we’ve grown from one person and a desk to an international firm with clients in the USA and Europe, with an enthusiastic and highly skilled team. Looking forward, I plan to continue to grow the firm and look for opportunities to work with other professionals to widen the range of services we can offer clients.

“It was also when I started out on my own that I joined Birmingham Law Society; setting up a business on your own can be quite isolating and I wanted the opportunity to continue to engage with my fellow legal professionals and to ensure that I keep abreast of all developments in the law and the legal sector. I was invited to put myself forward for the role of President and was duly elected. Taking on the role of President of a society, which is celebrating its 200-year anniversary, is a huge honour and privilege. I learned so much about the legal profession in all disciplines and represented our society in a visit to Brussels and the USA. I was invited to speak about the profession at events around the country; it was a great platform for me to shout loudly to audiences about the huge skills we have in our local legal community. My objectives for the year were to promote the Society on an international platform, engage with local business leaders and get a seat at the table for the society to participate in decisions made regarding the growth and development of Greater Birmingham and an issue close to my heart; the voice and promotion of women in the legal profession.

“In spite of all the accolades I have had the privilege to receive, I feel completely honoured to be named as an Alumni of the Year 2018. I have never considered myself to be an academic but have always respected the need to study the law and provide the best advice to my clients based on my thorough understanding of legal principles. To be celebrated as an individual who is recognised as being an expert in my field, as well as being a leader in the legal community, is nothing short of an absolute privilege. I will carry this badge with pride and continue to support and promote the School of Law at BCU.”