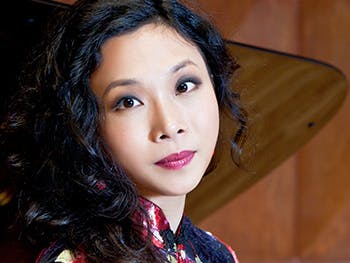 Having started learning the piano at a young age in her native China, Di Xiao then got the chance to study at Royal Birmingham Conservatoire where she developed personally and professionally, and had the chance to build her experience with the opportunity to perform at such prestigious venues as Birmingham’s world-famous Symphony Hall.

On completing her studies, she was selected as the UK's European Concert Halls Organisation (ECHO) Raising Star for the 2008/09 season, which led to further recitals in prestigious venues in the UK, the Netherlands, Germany, Spain and Austria. She has released four albums and been featured on TV and radio in the UK and China. Di continues to play for audiences across the world, performing regularly outside the UK in Europe and Asia. She aims to become an international ambassador for the piano, combining both Chinese and Western repertoire in the programming of concerts and creating a bridge between the two cultures. She remains involved with the University as a Piano Tutor, helping to nurture the next generation of pianists.

“I was born and raised in South China and come from a very humble background. My mother is very artistic but never had the opportunity to develop her talent. So when I was two, my parents bought me a piano even though that meant that my dad had to sell his motorbike, the family's only transport, to raise the funds. In order to find a good teacher, my dad had to pedal for an hour each way across the city with me on the back of his bicycle, to get to my piano lessons. Later on I was fortunate to be selected for the class of a Russian professor, Aleksandar Bogoevski, in the junior Conservatoire in my home town of Guangzhou. He inspired me and there I improved rapidly and found my passion in life.

“At the time, this was the only university that allowed us to do a placement in the second year, which was very attractive to me as it allowed us to combine studying with gaining practical experience. The teaching there was great; I had Graham Wright in the first year who was amazing and Ewan Kirk for EU law, who I still speak with to this day. I went to New York on placement, where I worked for a criminal law firm and defended clients in a number of cases, including one of the defendants from the 2005 London bombings and murder trials. It was an amazing experience and it allowed me to see how what we learned in class was used in a workplace situation.

“When I was doing my Master’s degree at the Central Conservatoire of Beijing, I played in a masterclass hosted by the then Vice-Principal of Birmingham Conservatoire, Mark Racz. He enjoyed my playing and, after he went back to the UK, invited me to study at Birmingham Conservatoire under scholarship so I said yes! Looking back, that really was the turning point in my life. “I remember that the student volunteer picked me up from the airport and everybody I met was so friendly and helpful. It did make a huge difference for someone who had just travelled half-way around the globe and spoke in a completely different language, as I had very little English then. I remember I marvelled at the facilities and the pianos I got to practise on. Until then I never knew that you could find so many different colours and textures on one instrument.

“The tuition I received from both of my professors was absolutely top class; they not only taught me music but also became amazing mentors in my life and inspired me to achieve great things. They helped me find my own voice and develop self-belief, which I believe to be the most valuable qualities a student can seek.

“When I first arrived, although the old buildings left a little to be desired, the instruments were superb and, over time, I developed a relationship with and grew fond of its performance spaces. Looking forward, I am so proud to say the new £57 million building is second to none. We have five performance halls, world class grand pianos to practise and perform on, cutting-edge equipment, and beautiful airy spaces to relax and meet in. Our students are really lucky.

“The skills and musical knowledge I learned were the foundation for everything I do today, but more importantly, the trust, care and encouragement I received from the University are crucial to my later success. I would never have got this far without that support. “Through winning most of the competitions available during my study, I got to play with orchestras and perform recitals at many public venues. The Symphony Hall/Town Hall prize I won in 2006 gave me the opportunity to play a recital in the magnificent Symphony Hall – I had heard its reputation way before I travelled to the UK. As a result of my successful recital I was introduced to the great pianist Alfred Brendel and he was kind enough to give me a private masterclass in that great hall.

“After leaving, I was selected as the UK's European Concert Halls Organisation Rising Star for the 2008/09 season, and performed in 13 of the most prestigious venues of the world including The Concertgebouw Amsterdam, Luxembourg Philharmonie, Hamburg Laeiszhalle, Barcelona L'Auditori, Vienna Konzerthaus and Wigmore Hall in London. I have released four albums and been broadcast on many European and Chinese radio stations including BBC Radio 3, Classic FM and Guangdong Radio Station. In 2012, TV Phoenix made a documentary of my journey from east to west. I've appeared in media including BBC Radio 4's Woman's Hour, BBC Radio 3 In Tune, and recently recorded for a Channel 4 documentary about the Chinese Labour Corps.

“Apart from the stage, I devote my time to becoming an international educator and cultural ambassador giving concert tours, masterclasses, lectures and talks across China. In 2012 I was selected as one of the Chinese young leaders to attend a round table conference at Parliament on the creative industries. In 2014 I directed the Birmingham International Piano Academy, a three-week course to help international students improve their musical skills in the UK. In the same year, I was awarded the Mulan Award for contribution to the arts and culture. I am also an Honourable Professor of ShanXi University, Visiting Professor of Guangzhou Xinghai Conservatoire and a trustee of Henry Wood Accommodation Trust.

“I spent the summer of 2017 touring China with sold-out concerts and masterclasses. The highlight of this tour was the recital in the magnificent Opera House in my home town Guangzhou, designed by the British architect Zaha Hadid. My 94-year-old grandma managed to be in the audience so it was a very special evening for me and my family.

“My ambition is to become an international cultural ambassador, to bring people together through music, to influence more youngsters and show them how exciting classical music truly is. I am currently working on ‘The Bridge’ project to bring East and West together for people and places not usually associated with the arts. I always aim to cross boundaries and to try something new, I started to compose last year and have recorded one of my pieces on my latest album. Another one of my projects brings contemporary dance and music together on the same stage. My ultimate aim is to keep sharing art, help and promote Chinese art and culture, contribute to the diversity of our community, and discover and share the beauty and richness of different cultures.

“I feel very honoured indeed to be chosen as Alumni of the Year for 2017. I also feel very lucky and grateful for everything that the University has done for me and the opportunities it has exposed me to. I arrived as a student over a decade ago and now, as an Honorary Member of the Royal Birmingham Conservatoire, I am part of this big family and I will endeavour to share its positive spirit with as many people and students as I can because I know that, apart from the amazing facilities that we now have, it's always the people that make a place special. I shall never take this responsibility lightly.”