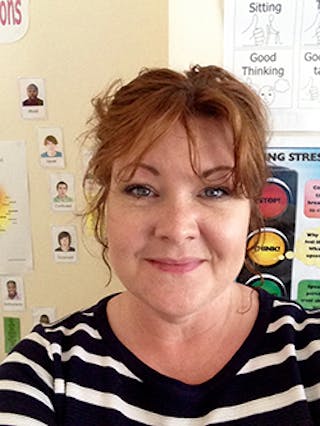 Claire fulfilled a long-held ambition by coming to the University as a mature student to study Speech and Language Therapy.

On graduating, she initially worked as a teaching assistant in a school for young people with learning difficulties and social, emotional and behavioural disorders, where she helped to raise awareness of speech, language and communication needs across the school. This led to her becoming employed by the school as a Newly Qualified Therapist (NQT).

Despite her success, Claire recognised the need for a support network to provide encouragement and resources to other newly-qualified practitioners who were looking for posts at a time of huge funding cuts across services. She created a group on Facebook to encourage networking and sharing of advice, and now has some 1,900 group members who regularly share research, updates from the Royal College of Speech and Language Therapists, and job opportunities

Claire has been an active member of Giving Voice, a national campaign from the Royal College of Speech and Language Therapists (RCSLT) to raise awareness of the impact of speech, language and communication needs and how speech and language therapy can transform lives. She also met with her local MP to raise awareness of funding cuts to NHS services. She has been an active member of the steering group for the West Midlands RCSLT Hub – a new initiative to bring together therapists at a regional level to form networks and collaborations.

Claire has continued to support the University, not only through her Facebook page, but also by coming in to share her specialist knowledge and expertise with students studying on the course.

"I had wanted to train as a Speech and Language Therapist when I was younger but I wasn’t very successful academically and I ended up working as a dental nurse for 10 years.

When I had my daughter, I took the opportunity to think again about what I wanted to do and decided to go back to college and complete an access to science course, which meant I could then apply to Birmingham City University for the course I had always wanted to do.

"I was a little apprehensive at first but the lecturers were extremely supportive throughout and there wasn’t anything that you couldn’t ask them. I started off studying full-time but had to switch to part-time because of my family commitments, and again everyone was brilliant in explaining my options.

"The block placements really helped us to get an idea of what it’s like to be part of a team, so we had the opportunity to experience all aspects of the role and how it works, not just the clinical side.

"After I graduated, I remember being at home one day and not having anyone to talk to about speech and language therapy, and the idea for the Facebook group came from there. Within a couple of days I had a few hundred members, and as well as providing an opportunity to chat socially, we also started to share ideas on things such as the interview process and experience, research opportunities and eventually jobs as well.

"It is a privilege to be working alongside some very experienced therapists on the Giving Voice project. It gives me the opportunity to further develop knowledge and skills. It’s been very positive and I was able to deliver a presentation to therapists about the use of social media as a networking and professional tool.

"In the future, I'd love to complete some postgraduate study as I feel that there is so much still to learn; it never stops.

"I was really shocked to hear that I was an Alumni of the Year, and had no idea I had even been nominated. I loved my time at the University and have made lifelong friends as a result; I just feel that I am doing my job because I love the profession and being able to help young people who have a variety of difficulties. My job is a big part of my heart."