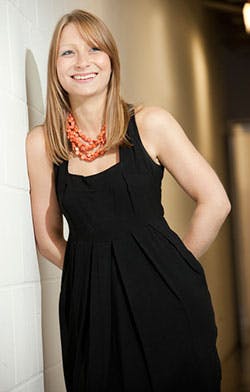 Having started her studies at Birmingham Conservatoire as a cellist, Charlotte decided she would prefer to be writing her own music and switched to composition. Since graduating with first class honours in 2006, she has enjoyed enormous success and in November 2012 was named by the Evening Standard as one of London’s 1,000 most influential people; the newspaper described her as “one of the outstanding composing talents of her generation”.

Charlotte has had many pieces commissioned and performed including Invisible Cities, premiered at the Verbier Festival in Switzerland in July 2012; At the Speed of Stillness, a BBC Proms commission premiered at the Royal Albert Hall 2012; and Caught in Treetops, premiered by renowned violinist Alexandra Wood and the Birmingham Contemporary Music Group (BCMG).

For 2009/10, Charlotte held a residency with BCMG, followed by her being elected Composer-in-Residence for 2011 by the Oxford Lieder Festival. In 2012, she was the judge who announced the results on television for BBC Young Musician of the Year.

She said: “I had an absolutely brilliant time at Birmingham Conservatoire, especially after I switched to composition. It was quite a small year group and that allowed us to have a lot of individual tuition, which was always absolutely fantastic, with people like Head of Composition Joe Cutler. We also had a lot of people who were very successful composers coming in to collaborate with us, and give individual and group lessons.

“We all had the chance to develop as composers without feeling we were being forced to fit in with a particular style – instead, we were given a thorough grounding to develop from. First of all, we gained experience by writing for other students at the Conservatoire, and then got to build a wider musical network by working with groups like Birmingham Contemporary Music Group and the City of Birmingham Symphony Orchestra which was really invaluable, helping each composer to find their own voice.”