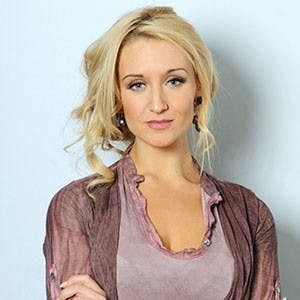 Catherine Tyldesley is an actress starring in one of the UK’s best-loved TV programmes, playing Eva Price in Coronation Street. After a Showcase at Birmingham School of Acting, Catherine was signed by United Agents and her first TV role was in a series called No Angels for Channel 4.

In the first few years of her career she supplemented acting roles with singing work, including singing before games at Manchester United. She first appeared in Coronation Street in a guest role as a midwife in 2006.

Her first starring role was in the 1920s-set BBC drama Lilies and she has also appeared in Holby City, The Royal, Shameless, Two Pints of Lager and a Packet of Crisps and Trollied. Catherine also completed a three-month stint in Emmerdale as Prison Officer Abi Peterson. She took up the role of Eva Price in Coronation Street in June 2011.