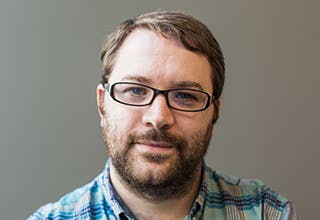 Cal is Chief Technology Officer and co-founder for business communications app Slack, which has over one million active users and has been valued at nearly $3 billion. This marks the latest stage in an incredibly successful career – Cal also developed the online creative community B3ta and was the chief software architect for photo sharing site Flickr.

In 2006, Cal wrote the best-selling book Building Scalable Websites and is currently working on a second edition. In his spare time, he continues to publish articles on web application development and contribute to open source projects. He is colour blind and has worked on applications to make the web more accessible for people with the condition.

"I've been interested in programming since I saw my cousin using a computer when I was five years old. It was a TI-99. My first computer was a ZX Spectrum +3, which I got a couple of years later. From the day I got it, I knew I wanted to be a programmer. At that time, home computers all came with programming languages built in, so you could write your own programs. I immediately started tinkering.

"I thought I'd grow up and work for Microsoft, writing desktop software. When I was in high school, the web took off and I started building things, mostly games, in my spare time. I realised that was how I could write software and have a lot of people use it – the web was the future.

When I was selecting a course, I knew I wanted to focus on software engineering rather than a more traditional general computer science course. After touring each of my first pick universities, Birmingham City University was the most appealing and my clear top choice.

"During my second year, I was very involved in the London weblog scene. It was a tiny community at the time, 10 to 15 people. Through these meetings, I met someone from the magazine publisher Emap and they convinced me to join them. I worked at Emap building magazine websites and internal tools while I completed my third year of university, and for two years after graduation.

"Another group of people I had met through the weblog scene had started a web-based game in North America around the time I graduated. I was a big fan of the game and I managed to convince them to hire me. That game was called Game Never Ending, which became Flickr.com. In 2005, Yahoo! acquired Flickr and I moved to San Francisco where I continued working on Flickr until founding the company that became Slack.

"I now lead a team of almost 100 engineers building a variety of applications and distributed systems that a million people rely on every day. While I spend most of my time these days in meetings rather than a text editor, the engineering knowledge and understanding that I gained at university is crucial for running an engineering organisation. Looking forward, there’s a lifetime of opportunity working on Slack. I plan to spend the next decades continuing to grow and shape this company.

"I'm very honoured to be named as an Alumni of the Year, of course! I've lived in San Francisco for over 10 years now and, being immersed in the industry here, it's quite meaningful to receive recognition back home. When I was a kid and thought I could one day work at Microsoft – it never occurred to me that I could build a company that might become the next Microsoft. Silicon Valley is a long way from Birmingham, and a university education opens up a world of possibilities."