Alumni of the Year 2011: Community Engagement and Leadership

Bethann Siviter is a well-known nursing writer, speaker and advocate for students, healthcare assistants and the art of nursing practice, as well as the author of two bestselling textbooks for trainee nurses. She overcame sudden illness and disability in 2006, not only returning to her demanding role as a Nurse Consultant but also using her experiences to help support other people with disabilities who work in nursing.

Originally from the USA, she came to the UK in 1999 and completed her nursing diploma at Birmingham City University in 2002. It was at the University that she built up her campaigning expertise as a student activist on the Royal College of Nursing (RCN) Association of Nursing Students (ANS) National Executive, initially as West Midlands representative, before becoming Chair of the RCN ANS (2001-02) and Student Member of the full RCN Council (2002-03). During her time with the RCN, she was responsible for putting forward students' views on the upcoming 'Agenda for Change' review into the pay of nurses to the government, frequently speaking with health minister John Hutton directly. As a result of her own experience as a student nurse coupled with feedback from students received in her roles with the RCN that she began to write The Student Nurse Handbook in an attempt to offer support and information for other pre-registration nursing students. 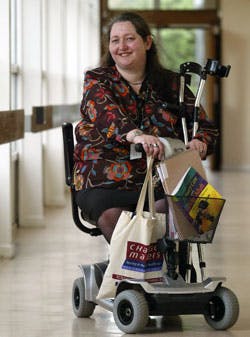 After graduating, her first post was as a District Nurse Team Leader in a nurse-led General Practice, then in 2005 she became a Nurse Consultant in community care and the care of older people at South Birmingham Primary Care Trust. When publisher Elsevier contacted the RCN asking for a student with knowledge of the British and American systems to look at a textbook from the USA to see whether it would work in the UK, they suggested Bethann, who advised against using the book in its current form but offered up her own guide as an alternative. This became The Student Nurse Handbook, followed in 2008 by The Newly Qualified Nurse's Handbook and a second edition of The Student Nurse Handbook.

She said: "It was more of a success than anticipated, I think because people could hear me speaking to them through the text - it was written in a very American style, saying 'you can do this' and that was something my readers appreciated. As students then met me through the RCN, they already felt I was accessible to them and were happy to talk to me with any ideas or questions they had. When I then had my accident and was in hospital, I received some excellent care from student nurses and I think sometimes we do underestimate what students can do, and what a gift they are."

Bethann now writes about the impact of developing a disability and returning to work after long illness as well as the importance of care by healthcare assistants, and is a contributor to journals on student nurse issues as well as being a contributor to the RCN's "Statement of Principles on Nurse Education". She has a regular column in Primary Health Care, a Nursing Standard family journal. Bethann also presents at seminars and is a regular contributor at RCN Congress, the annual meeting of the Royal College of Nursing. Her most popular seminar is 'Transitioning from Student to Staff Nurse', a motivational seminar intended to help nursing students through the traumatic transition from education to employment.

She is also editor of the RCN Work Injured Nurses' Group (WING) forum newsletter, has been appointed to the Nursing and Midwifery Council's (NMC) Professional Practice and Registration Committee (2009-11) and is on the NMC's expert panel on disability as well as on the British Standards Group Disability Expert Reference Group.

She said: "I had to find meaning in becoming disabled because it really shook my sense of self, but I realised it was an opportunity to help nurses to truly understand what it means to be disabled. I realised how little research there had been into disabilities in nursing, and some of the attitudes that persisted that said if you're disabled it's not possible to do the job. There are many people in nursing with disabilities, not necessarily as obvious as mine, but with issues such as back complaints or mental health conditions like stress and depression, which sometimes people don't feel able to mention. Nursing is between the ears, not between the vertebrae, with the knowledge you've built up as important as your physical ability."

Looking ahead, Bethann plans to continue in her role, advancing the cause of nurses with disabilities through leading by example and by further study and research. She said she was delighted to have been named as one of the Alumni of the Year from a University where she still has so many fond memories.

"I'd like to get my doctorate for the added credibility that brings - there's so little research into disability issues around nursing and I want to contribute to improve that, but I also want to continue in my job to show people what it is possible for someone in my position to do. I'd also like to work in academia and help to challenge nurses' perception of disability right from the start of their training.

When Carol Doyle from the University contacted me to say she wanted to put me forward for this award, I was pretty awestruck - to be recognised by somebody I have so much respect for meant a great deal to me. I have so many memories of the University - I learned that anything was possible and if something was the right thing to do, there was a way to do it. I had so many wonderful lecturers who didn't see us as students, but as colleagues in development, and I have always looked to take that attitude with me. I hope I get the opportunity to give more back to students and the University and this award will give me more opportunities to do that.