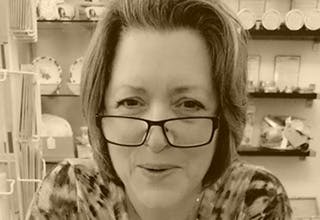 Angela started designing her individual characters under the Burman Bears brand in 1998. She creates contemporary, traditional and vintage-inspired characters made using the finest materials and designed to last for generations.

Despite the early success of her business, Angela decided to come to Birmingham City University to study Visual Arts, specialising in soft figure sculpting, to gain more of a formal grounding in the techniques of fine art. She then benefited from the University’s contacts with industry to sell her creations through the Birmingham Made Me initiative.

Angela has continued to sell bears direct to the public, as well as running bear-making workshops three times a year. She has also created Whisper the Listening Bear, which is extensively used by teachers, counsellors and therapists when providing comfort and friendship to children who may have suffered trauma, bereavement, neglect, abuse and many other issues.

Whisper has been used to raise funds for various charities and Angela hopes to further extend his reach in future with possibilities including animation, computer games or an App.

“I have enjoyed all kinds of art from as far back as I can remember, but only started taking a real interest in developing my painting skills from early 1998 after finishing a career in the entertainment industry.  I quickly found I was drawn to light and colour, and the psychology behind it.

“I realised I had skills in many areas of art and a creative desire to push myself but not necessarily in the traditional fine art mode. I wanted a more formal education to help me focus and learn. After my interview for Birmingham City University, which took place at the Bournville campus, I just knew it was the place for me. I had spoken to a number of graduates previously who gave such good feedback.

The teaching was excellent.  It's funny because I thought they were going to physically show and teach in the way they do at school, but it was much more than that.  They helped me think in a completely different way and really pushed me in areas that I needed to be pushed. As a result I now really enjoy the process of research for my projects.

“The facilities were outstanding and I wanted for nothing. Support was always available and the learning environment was a constant and ongoing presence in my own development. I was already working with soft sculptures while designing characters, so I was pleased to have the opportunity to work with a different kind of sculptor using clay and learn about the bronzing process. I learned a great deal and it made me question what I was doing and why I was doing it. It was a challenge and it took me out of my comfort zone, in many different directions. My peers were also a valuable aid to my work with ideas, suggestions and support.

“For the last two years I have been at The Handmade Boutique selling my products in Touchwood, Solihull, Great Western Arcade in Birmingham, the Gracechurch Centre, Sutton Coldfield, and soon the new revitalised Mailbox in Birmingham. My sales are mainly at the boutiques and through my website and this leads to private commissions. I also hold Burman Bear-making courses at the Ramada Hotel in Sutton Coldfield three times a year.

“Looking to the future, I am looking for a sponsor for Whisper to take him to the next level.  I would like to have him manufactured so that many charities, therapists and organisations who work with vulnerable children could afford to have one as part of their resources, and even have smaller ones in the major stores so that any child who needs a Whisper to talk to has access to him.  I'm interested in investigating the possibility of animation, interactive computer games and possibly an App not just for Whisper, but also for many of my other bear characters. For Burman Bears, I want my own shop showcasing my one of a kind characters with an old-fashioned tea room with an ideal space to hold my workshops. I'm really proud that I have been invited to be part of the Mailbox App Exclusive Club offering an exclusive design experience, which will be launched early 2016.

“It never occurred to me that I would be a candidate for such an honour as Alumni of the Year. I remember when I attended my graduation ceremony being enormously impressed with those who received such awards. When I realise that I'm now in that group, I'm humbled and amazed.”