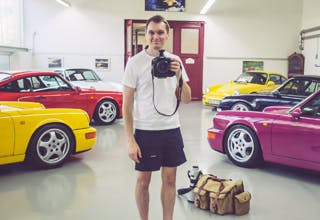 Since graduating, Alisdair has built a reputation as a freelance photographer, specialising in the automotive sector, providing car manufacturers, advertisers and publications with the high-quality images they need.

Alisdair built his expertise in studio lighting and location knowledge while at the University, before graduating with a First Class Honours degree in 1999, alongside his twin brother Jonathan, who specialised in illustration. He has remained involved with the University, supporting current students with their portfolio preparation and reviews.

“I was actually planning to be a mechanic when I left school but I was ill during my last year and, while I was recovering, I got an old camera down from the loft and started taking photos of some artwork my brother had done. I enjoyed it and he suggested I looked into the photography course at Birmingham City University, where he was already planning to go.

“I started off with the National Diploma course at Bournville and we had a visiting lecturer come in during the second week who was one of the top advertising photographers in Birmingham at the time. I asked if I could go out on a job with him, and he said yes, and I must have made a good impression because he then asked me to go on another job with him a few weeks later. I ended up continuing to do that throughout my diploma, and then when I moved onto the degree, so I was learning a great deal at the University and from that work experience at the same time.

The teaching at the University was good and the lecturers gave us all the instruction we needed but, just as importantly, we had lots of time to practise and develop our own style, which was very useful to me. There were lots of talented people on the course, but all doing different things – some were very artistic, whereas I was always fairly commercial in my approach, but the course was flexible enough to accommodate us all.

“At the end of the course, we had our Major Project and, up until that point, I’d done a lot of studio work but not many photos of people, so I forced myself to do something different for the project and photographed people who owned Land Rovers – which included the obvious farmers out in fields, but also a designer and a historian. After I finished my degree, I got a call from a Land Rover magazine, who asked if I’d do a job for them, and more work came off the back of that. I wrote to a Mini magazine offering my services and was taken up on that, and that led to me being contacted by a truck publication, and I still photograph a lot of trucks today. I wrote to a Porsche 911 magazine Total911, and I’ve shot so many features for them, I probably have the largest library of Porsche 911 images in the UK now. I’ve only ever spent £30 on advertising – sending out the initial letters – since then, it’s all been word of mouth with people approaching me.

“I managed to build my reputation quite quickly because of my style – lighting stuff on location – which was something I developed while I was on my course that no-one else was doing at the time, although it’s become more common now. It works well for magazine covers, so I’ve done a lot of those – about 350 at the last count. People know what they’re going to get with me so they know they won’t have to spend a long time making arrangements or setting stuff up.

“As well as working for the car manufacturers and magazines, I do quite a lot of work for the Camping and Caravanning Club now, which takes me to some nice places; I’m out and about almost every day and I’m pretty busy – it’s a good mix and I’m in the fortunate position that I don’t have to look for work, and can choose projects that interest me. I’m happy where I am now – I’m doing a bit more video, as with digital technology there’s more crossover there now, and I’m starting to experiment with drones, so there are some new opportunities to do something a bit different while sticking to the career I know and enjoy. I also regularly write features too, so do words and picture jobs for the Land Rover and Porsche 911 magazines.

“Even now, I refer back to what I learned on the course every day. Only a few weeks ago, I did a project for Jaguar Land Rover about suppliers to the company, and I took many of the exact same pictures I’d done for my degree project before – I’m doing many of the same things but now getting paid for it!

“I’ve been back to the University a few times to give talks to students and it’s always interesting to see the different perspectives and backgrounds they bring to the course. Being named Alumni of the Year was a total surprise but a very good one.”