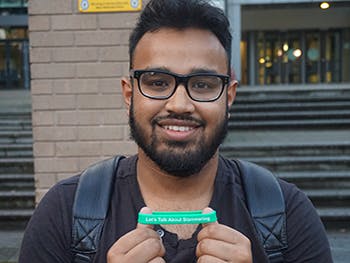 School of Education and Social Work

Abed teaches secondary school maths at Holte School in Birmingham, an achievement made all the more impressive by the fact that he has had a stammer since the age of four. Despite the fact that teaching requires a lot of speaking, Abed has overcome his difficulties and also set up his own stammer support sessions in the school, to help young people in the same position.

Sessions have included drama and theatrical role-play, interview practice and tips, and advice on how to approach people. He also spreads awareness through his posts on Twitter as @stammer_teacher and his YouTube channel, where he shares tips with other teachers. He has given a wide range of talks and media interviews about his experiences, including featuring in a short documentary film as part of the Amazing Humans series for BBC Three.

Abed’s achievements have not gone unnoticed, and he was shortlisted for the ‘New Teacher of the Year’ award at the TES Schools Awards 2018.

He is moving to a new school for the 2018/19 academic year, but he intends to conduct similar work with stammerers there, and hopes to carry on inspiring and motivating people with stammers wherever they are.

“Teaching was a career that interested me and, by about the age of 15, I’d decided it was what I wanted to do. When I went to a careers event, I spoke to a provider who said that teaching was a profession where you had to speak all the time and I might find it difficult. That put me back a bit, but in the end it just made me even more determined to carry on. The first university I applied for turned me down, which was a setback, but BCU were very positive from the start.

“The teaching I received there was extremely helpful; the academics taught us a lot about improving our techniques and managing stress, and the message was always that teaching itself was the most important thing and not to get sidelined by anything else. For me, that meant that I stopped worrying too much about my stammer – I knew that, if I focused on the teaching, everything else would be fine. Our mentors always had an open door policy, and would say that if we had something like a lesson plan to do, to come in and we’d go through it together. At no point did anyone question me about my stammer, or treat me any differently, which was really important to me.

“As a School Direct applicant, I was training at my local school, Holte School, where I went to work full-time after completing my course. When I started there, I went to see my head of department straight away about my idea to offer extra support to students with a stammer – I said I’d do it all in my own time, and just wanted to do what I could to help. Many of them were already receiving Speech and Language Therapy but what I was offering was quite different – it was less formal and more about confidence building, activities, and just getting them to talk more. I feel it has made a massive difference and it’s something that I love doing. Around one per cent of the population stammers so at a school of this size, there will generally be several pupils who are affected. The pupils who’ve taken part have become much more confident and other teachers have said to me how much more they now engage in lessons as a result.

“I wrote a few articles, partly just for myself, and I also hoped some other teachers might read them and find them helpful. I never imagined how much attention my work would get and how much media interest there would be but I’m very happy and it’s been great for the kids who’ve been involved as well. It’s something for them to feel part of and they’ve all loved seeing themselves on TV for the first time!

“I’d say that all the staff at this school are more aware now and, if you look at the national picture, awareness is certainly growing and is better than when I was at school. There is also more awareness generally – the recent TV programme School for Stammerers was great as it put the issue on prime-time TV, which was something I’d not seen before.

“As for the maths teaching, it is a difficult subject for some people and the recent curriculum changes have made it more so, with even more for pupils to take in and perhaps a feeling that it is more focused around the highest achievers. What I always try to do is make it as relevant as possible and try to bring in examples of how we use maths in real life, which helps more people to understand what maths is all about and why we need it.

“I definitely use what I learned at University a lot, as the staff there gave us a lot of resources and techniques that we could take with us into the classroom. Also, there’s things like how to make the most of our time – we learned that there’s so much to do as a teacher, we can’t always reinvent the wheel; sometimes it’s best to stick with what we’ve got and make small changes.

“I’ve got a new job in another school to lead on teaching and learning in maths from September, but I’ve already spoken to them about my work for pupils with a stammer and they’re very happy for me to continue it there. Working at a different school will give me more experience which will help in my future career, and I think my work with stammerers is something which I can take with me wherever I go.

“I was really proud to hear I was an Alumni of the Year – it made me feel like I’d really come a long way, and training for your PGCE is a tough year, but it has paid off and my work has been recognised. One of the first things I did was tell my students, who were all really excited, and I’m proud of them as well.”