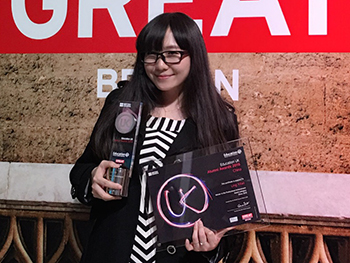 A bestselling graphic artist from Beijing has come out on top in the Education UK Alumni Awards 2016, organised by the British Council.

Yifan Ling (凌一凡), who graduated from Birmingham City University in 2006, was presented with the Professional Achievement Award at a ceremony in China on the evening of Saturday 19 March.

Yifan studied for her postgraduate MA at Birmingham City University's School of Visual Communication, one of the largest of its kind in the UK. During her time at the University, Yifan won the Best Recommended Award as part of the Macmillan Prize 2006 for her children's book 'Cactus'.

Over 250 guests were present in Beijing to see the Chinese winners announced on Saturday 19 March at the event which also marked the culmination of the first ever UK-China Education Policy week.

The ceremony followed months of searching, with nine finalists selected from a global pool of more than 800 applicants. Following in-depth interviews with a judging panel, the Chinese recipients were chosen for three award categories: Professional Achievement, Entrepreneurial, and Social Impact.

"The remarkable young people we heard about tonight have taken their UK education as a starting point to excel in many fields, and to share their passion for learning with those around them.

"This year's awards ceremony was testimony to the diversity of UK alumni and the transformative impact of a UK education. These alumni are a credit to their universities and an inspiration to international students. With more than 600,000 Chinese alumni of a UK education back here in China, we have a lot to celebrate."

"Yifan came to Birmingham City University with an excellent reputation as a leading comic artist and it was great to be able to introduce her to new ways of thinking and making images. We enjoyed really fruitful conversations and the resulting work was astounding.

"This is why we do what we do – it is always great to be surprised by new directions and seeing someone reach higher. I wish Yifan well with her successes and we are all delighted that she has won this award."